The peritoneum or latin peritoneum (older also peritoneum , from ancient Greek περιτόνειον peritóneion , German , the serving for Moreover margins, the above-loaded ' ; derived from it already in Hippocrates specifically ancient Greek περιτόνειον peritóneion , German , the peritoneum' ) dressed as a smooth, transparent and serous Skin out the abdomen and organs inside. It surrounds most of the internal organs below the diaphragm up to the entrance of the small pelvis . The peritoneum is characterized by a single-layer, flat epithelium ( mesothelium ).

The peritoneum houses the blood vessels , the lymph vessels and the nerves of the abdominal organs. 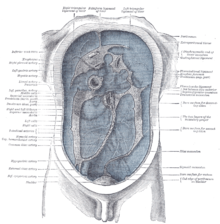 The peritoneum, in blue 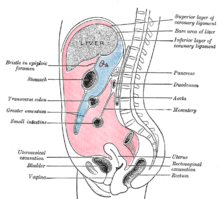 The omental foramen, the larger pouch (red), and the small pouch or omental bursa (blue)

The space between these two layers is called the peritoneal cavity . This is filled with a relatively small amount of serous fluid compared to other body cavities, which allows the two layers to slide easily on one another.

The total area of ​​the peritoneum in humans is about 1.6–2.0 m². There are five longitudinal folds (Latin plicae ) on the front wall of the abdominal cavity below the navel . The three medial are rudiments of embryonic development . The unpaired, innermost protrusion contains the urachus, obliterated to the median umbilical ligament , and the two umbilical arteries , which recede into the medial umbilical ligament after birth , run alongside it . The lateral folds of the peritoneum contain (also postnatally) the arteriae and venae epigastricae inferiores . In surgery , these folds serve as important anatomical guide structures.

The urinary bladder ( vesica urinaria ) is located in the so-called subperitoneal space , it is only covered by the peritoneum on its upper side.

The term "mesentery" (fachsprachlich mesentery ) often refers to a double layer (duplication) of the visceral peritoneum. Often there are blood vessels, nerves, and other structures between these layers. Strictly speaking, the space between these two layers is outside the omental bursa and thus not inside the peritoneal cavity.

There are two main regions of the peritoneum that are connected by the omental foramen : the larger and the small mesh sac ( omental bursa ). The small pouch is divided into two parts: the small ( omentum minus ) and the large mesh ( omentum majus ). The lesser omentum is connected to the lesser gastric curvature and to the liver. The greater omentum hangs down from the great curvature of the stomach and forms a loop in front of the intestines, then bends backwards upwards and connects to the transverse colon. So it hangs in front of the bowels like an apron.

The outline of the abdominal structures

The peritoneum secretes and absorbs peritoneal fluid, a secretion that acts as a "lubricant" to reduce friction ( viscosity ) on its surface and thus facilitate movements of the organs against each other (e.g. when the stomach is full or during pregnancy). The amount of fluid is usually small at 50 to 75 ml in adult humans; any larger accumulation is pathological and is called ascites . Inadequate production of peritoneal fluid can lead to pain or even adhesions of the peritoneum when the organs are moved because of the increased friction. An inflammation of the peritoneum ( peritonitis ) is a life-threatening complication of violations of the abdominal wall or of the intestine, of cancer as well as the "ruptured appendix" as a result of appendicitis or appendicitis (inflammation of the appendix extension).

The most common diseases of the peritoneum are: