Billy Jenkins in the Berlin Plaza , 1939

Rosenthal was the son of Elfriede (birth name Fischer) and the circus clown "Süßmilch", who ran a variety café at Lehrter Bahnhof . He was of Jewish faith and received a Mosaic education and attended a private high school. After finishing school he began an apprenticeship as a butcher in Potsdam , which he broke off. Since his parents died early, he first sought his fortune in seafaring. At the age of 15 he was already hired on the mail steamer "Marie Woermann" (built in 1887). This trip brought him to South Africa, where he began to look for precious stones and gold. He was involved in fighting in Africa ( Boer War ) and after another sea voyage in China ( Boxer Rebellion ) and returned to Germany with the troops of Field Marshal von Waldersee .

Billy Jenkins with lasso in the Berlin Plaza, 1939

Then Rosenthal traveled to America and received training to become a western rider at the 101 ranch , a training facility for young circuses . There he learned horsemanship, lasso throwing and shooting with firearms and bows and arrows. His stage name "Billy Jenkins" was probably based on his admiration for Buffalo Bill , whom he met when he was five, and is said to have been derived from this "Billy" and a relative from the USA named "Jenkins".

Jenkins appeared as an art shooter, lasso thrower (trick roper) and raptor dresser . He made his first appearance on June 12, 1909 in the Rose Theater in Berlin. One of his models was the trainer Hans Stosch-Sarrasani , the founder of the traveling circus of the same name and his father's former employer. The gun ban for Germans introduced in November 1918 hit the archer hard, so that he shifted his work to training birds, for example the golden eagle "Goliath". Since the 1920s he has been one of the most important birds of prey tamers in the world. From 1921 he then appeared alternately in various vaudeville shows and circuses in Europe, such as the circuses Beketow (1921), Siblings Birkeneder (1925/26), Schneider (1927/28), Belli and Hagenbeck (1930). His longest engagement was with the Sarrasani Circus (1933 and 1936-38). The center of his life was the property inherited from his parents in Berlin-Reinickendorf in the Konradshöhe district , where he trained birds of prey on his “Billy Jenkins Farm”.

Jenkins appeared as an actor, for example, in the film Der Bär von Baskerville (1915) by director Harry Piel , where he did the lasso work for the main actor. He can be seen with Tom Mix in two Hollywood films, The Ranch on the Powder Keg and The Black Rose of Texas .

During the time of National Socialism he changed his surname in 1933 and renamed himself "Erich Fischer" after his birth mother. Despite the resulting danger to his life, he became a member of the NSDAP . During this time he continued to appear in variety and circus performances (with Sarrasani and Busch ), including in the Wintergarten , the Plaza and in the Scala in Berlin, in the Hamburg Hansa-Theater , in the Leipzig Krystallpalast and even in a performance for Hitler and Goebbels to entertain them with his arts.

From the beginning of 1940 he went on a tour through occupied Poland with the Busch Circus. On August 5, 1940, he suffered second and third degree burns in the Circus Busch special train from Lodz to Waldenburg . All his possessions and all dressage birds were burned. After this serious accident and a partial removal of the chest, whereupon he wore a steel corset while running, he had to end his active career as a riding artist. 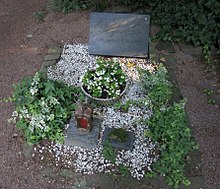 He had his first appearance after the end of the war at Christmas 1946 in the Freiheitshalle in Hof . From October 1949 he traveled through Germany with his own Wild West show . His companion was Olga Pannek, who performed with him under the stage name Margot Astoria. He eventually moved into an apartment in Cologne-Nippes with his partner . Even in his private life he ran around as a cowboy wearing a hat, fringed shirt and breeches . When he ran out of money, the former hero of countless Wild West magazines lived in a trailer.

Billy Jenkins died on January 21, 1954 in Cologne at the age of 68. After his death, a number of "cowboys" and "Indians" came to his funeral and shot an honor salute, so that the "eternal cowboy" finally got a funeral worthy of him. After the rest period had expired , the grave was to be leveled, which his large fan base (the Jenkinsians) was able to prevent. Today the grave is adorned with a tombstone in the Melaten cemetery (corridor 55 no. 162/163) in Cologne.

The Werner Dietsch publishing house published 1934-1939 under the title Billy Jenkins fictitious Wild West trivial novels . These stories, written according to reports by the western man Billy Jenkins , suggested to the reader through original photos by the author that the eponymous hero had experienced the adventure himself. After the war, Uta-Verlag continued the most successful German-language western series from 1949 to 1963. According to his daughter Anita Gneist (née Berends), the cover illustrations for the Billy Jenkins notebooks and books came from the painter and graphic artist Heinrich Berends (1894–1973) from Bremen. Most of the photos in the booklet come from the broadcaster and actor Karl Heinz Delow (1920–1980), whom Billy Jenkins knew from Leipzig.

The novels were written by authors such as Gert Fritz Unger and Rolf Randall . When Jenkins ceased to appear publicly, the booklets kept his stage name well known. The pre-war editions are now coveted collector's items for which handsome sums of money are offered.