Bulqiza ( Albanian  also  Bulqizë ) is a small town in eastern Albania . In addition, the valley in which the village is located is also called this. Some villages in the vicinity also have Bulqiza as an addition to their name. The city has 8177 inhabitants (2011). The local authorities, on the other hand, give a significantly higher number of 12,323 inhabitants (2014).

By 2015 was Bulqiza an independent municipality ( bashkia ) , then with the other communities of the circle Bulqiza merged. The new municipality has 31,210 inhabitants (2011).

In recent years, as in many other rural areas of Albania, the population has declined significantly. The majority of the population is Muslim , a large part of them are Bektashi . In this parish is the medieval Tekke of Peshku .

There are two primary and one middle schools in Bulqiza. 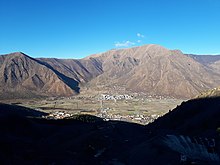 The place is on the SH6 , which leads from the coastal plain near Milot via Burrel to Peshkopia , and at around 740  m above sea level. A. At the end of a deep valley, the bottom of which is wide and shallow. This enables the creation of a raised bog and a few small lakes . A few kilometers west of Bulqiza the valley ends at 842  m above sea level. A. high pass Qafa e Buallit . The mountain Maja e Dhoksit ( 2020  m above sea level ) rises above the city to the south .

The urban areas of the city are limited to different quarters on both sides of the valley, which are separated by the wetlands in the middle of the valley. The old part of the city on the south side is the center of the place. The new district on the north side was built as a dormitory city, since houses threatened to collapse after the mining activities.

Until 2015, the area of ​​the municipality of Bulqiza was divided into the following municipalities:

The name Bulqiza was first mentioned in writing in 1467.

Chromium was discovered in Bulqiza in 1948 . Already two years later the dismantling began with Soviet help. Only then did a small village become a town in which a factory for crushing the ore was built.

Overburden dumps of a mine on the outskirts, in the background the new district

The Bulqiza mine is considered to be the largest in Albania. Nonetheless, after the end of the communist regime in 1991, production collapsed and a large proportion of the workforce had to be laid off. In late August 2007, the main mine was temporarily closed by the authorities after four workers lost their lives while on the job within two months.

Today, in many small mines around Bulqiza, chromium is extracted with the simplest means, with accidents and deaths occurring again and again. The Austrian mining company DCM has been the operator of the main mine since 2007 and employs around 700 people, who repeatedly strike because of inadequate working conditions and low wages. A Canadian mining company is also active in and around Bulqiza. In the district of Dibra work around 1100 people as miners, mostly in Bulqiza and environment.

With the construction of the Rruga e Arbërit , the city will be better connected to the capital region and the port of Durrës .