The title of this article is ambiguous. Further meanings are listed under Cap Corse (disambiguation) . 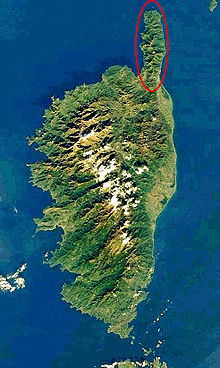 Cap Corse is the red-rimmed peninsula in northern Corsica.

Cap Corse ( Corsican Capicorsu , Italian Capo Corso ) is a peninsula in northern Corsica . It is located in the Haute-Corse department .

The peninsula has a length of approx. 40 km and a width of approx. 10 km. At its southeastern end is the city of Bastia . The highest peaks are Monte Alticcione (1138 m), Monte Stello (1306 m) and Cima di e Follicie (1324 m) (with the cave Grotta a l'Albucciu ). North of the Cap Corse is the small island of Giraglia belonging to the municipality of Ersa .

The Cap Corse is characterized by rural exodus.

The following municipalities are located on Cap Corse ( sorted clockwise from southwest to southeast):

The Cap Corse is relatively little developed for tourism. It is a well-known wine region, the Cap gives its name to the Muscat du Cap Corse wine .

The Corsican patron saint Julia of Corsica lived temporarily in the area.