Carmen Laforet Díaz (born September 6, 1921 in Barcelona , Catalonia , Spain , † February 28, 2004 in Majadahonda , Community of Madrid , Spain) was a Spanish writer who wrote most of her works during Franquism . Despite the difficulties she faced, her role as a woman made her stand out in literature. One of her best known works is Nada ( Nothing ). 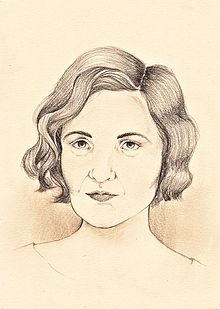 Carmen Laforet was a Spanish writer.

Carmen Laforet was born in Barcelona on September 6, 1921 . She was the daughter of an architect from Barcelona and a teacher from Toledo . When she was two years old, her family moved to the island of Gran Canaria in the Canary Islands for professional reasons of their father, who worked as an industrial engineering teacher . There she spent her childhood and youth. She was the firstborn out of the marriage, followed by her brothers Eduardo and Juan, with whom she said she always got along well.

After her mother's death, her father married a woman with whom Carmen never had a good relationship. In 1939 the author returned to the peninsula to study philosophy in Barcelona, ​​where she lived for three years. She later moved to Madrid to study law at the Complutense University of Madrid, but she did not finish any of the courses she had started. In 1945 she published Nada, a novel with which she was the first to win the Destino publishing house's Nadal Prize in 1944. This novel was a critical and popular success and brought the young Laforet literary fame. In 1946 Carmen Laforet married the journalist and literary critic Manuel Cerezales, with whom she had five children. They split in 1970.

In 1950 Laforet published La isla y los demonios , a novel set in the Canary Islands, where she grew up. In 1955 she published La mujer nueva , a work marked by the author's religious experiences. In 1963 La insolación was published , the first volume in the trilogy Tres pasos fuera del tiempo . A long time followed in which she worked on the other two volumes of the trilogy, but without publishing them. In 1965 Carmen Laforet traveled to the USA . In 1981 she published the essay Mi primer viaje a USA about her experience in this country. There she met the novelist Ramón J. Sender , with whom she had an interesting pen pals. In 2003, her daughter Cristina Cerezales published the work Puedo contar contigo, which contains a total of seventy-six letters in which the writer reveals her literary silence, her pathological insecurity and her desire to be protected from social contact. Her personal situation while writing the letters was difficult because she had separated in 1970 and she lacked economic stability. The general circumstances, for example the political and social climate or the prevailing machismo, which led to her being asked in interviews, for example, whether she loved her children or her books more, also contributed to this.

In her letters to Sender, she lamented the gray world of literature, which she saw full of envy, hostility and quarrel. Laforet did not want to assign herself to any “of these warlike empires”, which is why she was viewed as “the enemy of all”. For his part, Sender admits to Laforet that there is only one person, Francisco Franco , who is angry with him. The author of Réquiem por un campesino español gives his girlfriend a detailed description of his anxiety crisis: “I don't agree to be old”. Religiousness was another theme of the letters they wrote. They both believed in God, with different nuances, and they shared their devotion for Teresa of Ávila . The tireless broadcaster was the opposite of Laforet and always encouraged her to write. Carmen Laforet also wrote short stories, picture books and travelogues. Among her picture books, La llamada (1954) and La niña y otros relatos stand out. (1970). Almost all of Laforet's work revolves around a central theme: the confrontation between youthful idealism and the mediocrity of the environment. Gradually, the author distanced herself from public life due to a degenerative disease that impaired memory ( Alzheimer's disease ) and which made her unable to speak in the last few years of her life. Carmen Laforet died on February 28, 2004 in Madrid.

In February 2007, to commemorate the third anniversary of the author's death, Menoscuarto published a compilation of all of her short stories for the first time, including the five that she had not previously published. In 2009 Cristina Cerezales published a second book about her mother, Música blanca ( Destino ), in which, in the words of Rosa Montero, “shows us another stifling space: the writer's age, her illness and deterioration”. Carmen Laforet is a writer long forgotten in the literary world until the publication of Puedo contar contigo by Israel Rolón Barada. After the publication of this author, who was credited with republishing La mujer nueva (a work first published in 1955 by Carmen Laforet herself), the author regained importance.

A series of biographies dedicated to Carmen Laforet were published in 2004 and were directed by the writer Nuria Amat. In 2004 the Instituto Cervantes of New York City ( USA ) honored the author for one of her cultural activities to commemorate the publication of her book Nada 70 years ago. There is also a square in Barcelona with her name: Plaza Carmen Laforet. There is a plate on which you can read in Catalan: “Va néixer en aquesta casa, font d'inspiració de la seva primera novel la Nada ”. This means: "She was born in this house, the source of inspiration for her first novel Nada .

In 1947 her novel Nada was brought to the silver screen. The film was shot by Edgar Neville with actors such as Conchita Montes, Rafael Bardem , María Denís and Fosco Giachetti . The film coincided with the censorship of the era. That's why it was cut by 30 minutes and many of the scenes that were shot in Barcelona were cut out. Later, in 1956, an adaptation of the novel Nada , a drama in black and white , was made into a film in Argentina by the director Leopoldo Torre Nilsson .

Carmen Laforet was one of the most important authors in the period after the Spanish Civil War . For her novel Nada (Dt. Nada , Baden-Baden 1992), which is still important today , she received the Nadal Literature Prize in 1944 .

Laforet published only two other novels in the 1960s. Of a previously announced trilogy , only La insolación was published in 1963. Although she finished the second part, Al volver la esquina , she never returned the proofs to her publisher . In May 2004 the novel was finally published posthumously . In 2006 the German translation of her book La isla y los demonios was published .