Christian pop music is Christian music that can be stylistically classified in the field of pop and rock music . Often the term CCM (is Contemporary Christian music , German: Contemporary Christian music ) is used. In contrast to the United States, this term has only caught on sporadically in Germany. In the English-speaking world, Christian popular music is also referred to as gospel - to be distinguished from "black gospel" or "traditional gospel" - or Christian music . Closely related but not identical in Germany is the so-called sacropop , which describes modern hymns in German. A similar but more widespread area includes the praise and worship music ( Praise & Worship Music), which is more focused on the relationship with God and is musically usually somewhere between soft pop, acoustic and rock music. 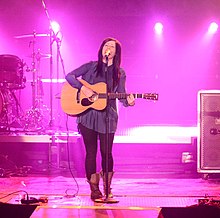 Christian rock music originated in the Jesus People movement in the United States in the 1970s. The first Christian rock groups and singers include 2nd Chapter of Acts , Love Song , Barry McGuire and Larry Norman , who coined the CCM scene's motto with the song of the same name, Why should the devil have all the good music . The genre began when music artists and groups embraced Christianity in the late 1960s and continued to make music in their style, but with Christian lyrics underlaying their songs. For example, in 1969 Upon this Rock - one of the first Christian rock albums - by Larry Norman, who served as a model for many other artists. From the first Christian rock groups, Christian metal developed over time . Since then, a large number of Christian music groups have emerged, which today cover almost every popular style of music, from hip-hop to folk , ska , punk , techno and metal .

In Germany, the development and use of Christian pop music began increasingly between 1960 and 1970. The music, which meets a largely conservative critical audience, has continuously developed a respected space within the framework of its presence at major evangelizations such as Euro '70 with Billy Graham Currently, the German Christian music scene is largely evangelical. The youth choir movement is considered to be an important preliminary stage and a parallel development for decades . Defining their style as Christian pop music, musicians and bands such as the Fietz team , Eden and, in the 1980s, Deliverance , Damaris Joy and Hella Heizmann performed mainly . In addition to the youth choirs, stylistically diverse groups and songwriters such as Arno and Andreas and Manfred Siebald were closely associated with the scene. Since the early 1980s, active people have also organized themselves in initiatives in the two major churches and in various free churches. Since 2000 the Evangelical Church in Bavaria has had its first professional association, the Association for Christian Popular Music in Bavaria .

Moreover arisen within the Christian communities and youth groups in the last 25 years, " praise and worship songs (English: Praise & Worship)" as a special musical and spiritual genre. As a kind of counterpoint to traditional church choirs and parish songs, this style of music has become very popular, especially among the Christians of the young and middle generation. The songs of praise and worship have replaced the “chorals” in some places and created a new and sometimes criticized Christian song culture.

The scene of Christian pop music is as diverse as the not explicitly Christian music scene, which is described as " secular ", only much smaller. It exists parallel to the secular music scene and prefers to find its audience in Christian circles. The lyrics of the songs often deal with topics from the Bible and the Christian faith , but also social or everyday topics. In the regular sales lists such as “ Billboard ” in the United States and “ Media Control ” in Germany, some performers achieved placements, including Amy Grant , Michael W. Smith , Normal Generation? , Stacie Orrico , Beatbetrieb or Allee der Kosmonauten .

In North America, the Booth Brothers are representatives of this genre. A number of other performers are Christians, some of whom also use Christian texts, but publish their productions on secular labels such as Xavier Naidoo and U2 . These are usually not assigned to the scene. Other performers have their records produced and marketed both by a Christian label for the Christian market and by a secular label. Record companies and publishers who have specialized in Christian music in German-speaking countries are for example Abakus Musik , Asaph Music , Free Records , Gerth Medien , J-Star , JesusRockrecords.de, Pila Music , Ruuf Records , Royal Family Records and SCM Hänssler , as well as ForeFront Records , Gotee Records , Sparrow Records , Tooth & Nail Records and others in the US.

Well-known events in the field of Christian pop music:

There are now a large number of publications in the academic field that deal with the topic of "Christian popular music". They are often written from a theological or religious pedagogical point of view. A detailed list of publications can be found in the following publications:

Independent music magazines that appear regularly have always existed, for example Exact . Musik & message , the music magazine of the Association for Christian Popular Music in Bavaria eV, has been on the market since 1996 . The magazine appears quarterly with a detailed topic section and is currently the oldest medium.