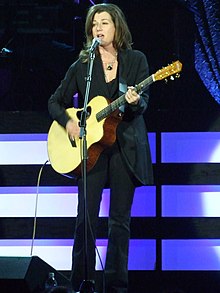 Amy Lee Grant (born November 25, 1960 in Augusta , Georgia ) is an American singer and songwriter . In the beginning she was particularly successful in the field of Christian pop music and is known as one of the first artists of contemporary Christian music to make the leap into the secular and mainstream pop music market.

She has won six Grammys and 22 Dove Awards to date, and was inducted into the Gospel Music Association 's Gospel Music Hall of Fame in 2003 . So far it can boast six gold albums (each over 500,000 copies sold) and seven platinum albums (each over 1 million copies sold), one of which is five times platinum, one is triple and one is double. In total, Grant has sold more than 30 million records to date.

At the age of 15, Amy Grant signed with a Christian record company and released her first self-titled album in late 1977, which was mainly composed by her. This quickly developed into a real box office hit in the Christian music market of the time. She released a few more albums while studying at Vanderbilt University in Nashville , before swapping her college career for one in the music industry. In 1982, the album Age to Age was released , which received a lot of critical acclaim and finally became the first record by a Christian artist to sell over a million times.

No sooner had Grant established herself as the "Queen of Christian Pop" than she began to change direction a little to reach a larger audience. An indirect goal was certainly to be the first Christian female singer and songwriter to be successful in both genres.

In mid-1985 she surprised her fans with the album Unguarded , on the one hand by the very popular music that was no different from other pop acts of the time, and on the other hand by the cover picture for this album, which Amy Grant in four different versions in one Shows leopard jacket. The first single Find a Way released from it became the first Christian song to make it into the Billboard Top 40 list. In the fall of 1986, Amy Grant scored her first Billboard number 1 hit with The Next Time I Fall , a duet with Peter Cetera , former singer of the band Chicago .

The record Lead Me On from early summer 1988, after considerable tension in her marriage to Gary Chapman and after she became a mother for the first time, is considered by many critics to be her strongest album, both for the lyrics and the music. This album contains a number of songs that are not obviously "Christian". The song Saved by Love was a small hit on the then newly emerging Adult Contemporary radio format.

When Heart in Motion was released in the spring of 1991 , many supporters were shocked and outraged again that this album largely dispensed with explicitly Christian lyrics and was clearly aimed at a mainstream pop audience. The piece Baby Baby , written for Grants eldest daughter Millie could keep for three weeks at the top of the American charts long. It became her biggest hit to date, and finally established her and her name in the world of music for the masses. Another four singles from this album reached the top 20 of the US charts. Heart in Motion is their best-selling album with over five million copies. Baby Baby was also able to stay in the top ten in the German charts for several weeks. The LP House of Love , released in the summer of 1994, continued the success story in the same way.

In the late summer of 1997, Amy Grant released Behind the Eyes , a record with a much darker mood. Soon after, it became known that Grant's marriage was about to end. This was followed by the separation from Gary Chapman and later the divorce . Many fans and Christian radio formats distanced themselves from her, which came to a head when she soon married country singer Vince Gill .

Although Amy Grant continued to produce records in the years that followed and has released an album every year since 2002, her focus seems to have shifted from a high-gloss career to a more family-related life. Her last album Rock of Ages ... Hymns & Faith , the sequel to the 2002 gold album Legacy ... Hymns & Faith , is a collection of Grant's favorite hymns , musically represented through Americana, folk, country and Blues influences is featured. From September 2005, Amy Grant presented the reality show Three Wishes on the American broadcaster NBC, in which three people's heart's desire was fulfilled. Before the year was over, NBC discontinued the series.

In April 2006, recordings for a live CD / DVD took place in Fort Worth, TX. Amy had her first paid gig there at the time. The recordings were released on September 26, 2006 under the name Time Again .

In a press release on April 27, 2007, the news is published that Grant is leaving her previous label, Word Records, to which she was under contract for 30 years, and has signed a worldwide record deal with the EMI label Sparrow Records, which includes all of her previous albums, for which the singer owns the rights and includes future albums.

On October 16, 2007, an autobiographical book entitled Mosaic: Pieces of My Life so Far was published by Waterbrook Press. Another greatest hits album came out in October , which was the first project of the new EMI CMG cooperation.

In 2008 their record company EMI CMG released an anniversary edition of their critically acclaimed album Lead Me On with live recordings of the tour at the time and newly recorded versions of some songs.