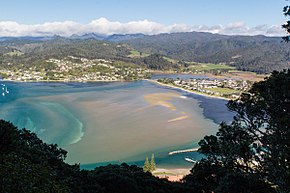 Coromandel Harbor on the west coast 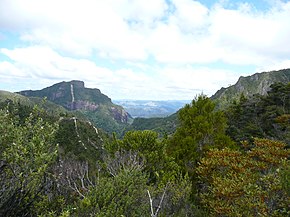 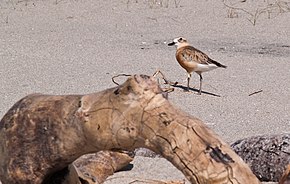 The Coromandel Peninsula , called Te Tara-o-te-ika-o-Māui in the Māori language , is a peninsula in the Waikato region on the North Island of New Zealand .

The name Coromandel got the peninsula as well as the place Coromandel from the merchant ship HMS Coromandel awarded for the first time in the June 13, 1820 Colville Bay anchored to the ship for the Royal Navy valuable Kauri -Holz to take on board. 12 months later, the HMS Coromandel traveled back to England fully loaded and left its name to the place and the peninsula.

The Coromandel Peninsula is located in the north of the North Island, 55 km east of Auckland . The peninsula, which extends roughly 85 km north from New Zealand State Highway 25A and is 40 km at its widest point, is bordered to the west by the Firth of Thames and the Hauraki Gulf and to the north and east by the Pacific Ocean and to the southeast by the Bay of Plenty .

North of Cape Colville , the northern tip of the Coromandel Peninsula , separated by the 16 km wide Colville Channel , is the island of Great Barrier Island , which geologically can be regarded as the earlier continuation of the peninsula to the north. A variety of islands lie off the east coast of the peninsula, such as Cuvier Island , the Mercury Islands , The Aldermen Islands , Slipper Island and Mayor Island , to name but a few. On the west coast there are some islands only in the northwest of the peninsula, such as the islands of the Motukawao Group and a few south of it.

By far the largest city on the Coromandel Peninsula is Thames , located in the southwest on the Firth of Thames . It is also the administrative seat of the Thames-Coromandel District , to which the peninsula is administratively assigned. Other important places are Coromandel on the west coast and Whitianga , Tairua , Pauanui and Whangamata on the east coast.

From a geological point of view, the Coromandel Peninsula is part of the Coromandel Volcanic Zone , which extends from Great Barrier Island , across the peninsula with its offshore islands, to the southern end of the Kaimai Range . Volcanic activities thus determined the geological composition of the peninsula, on which andesite and rhyolite rocks are the dominant types of rock and only on the northern tip, on two strips on the west coast and a small area on the north-east coast, the graywacke base rock determines the surface structure.

The Coromandel Peninsula is also known for its rich gold deposits, which were mined from the 19th century and gold mining on the peninsula with the Martha Mine in the town of Waihi continues to this day.

The Coromandel Peninsula area was previously known for its gold mines and the woodworking industry specializing in kauri trees . Today the region lives to a large extent from tourism. Agriculture is practiced in an area south of Whitianga and in the Tairua River valley and some smaller areas further south.

From Coromandel it is possible to travel to Auckland by ship . The places on the east coast have marinas for recreational sports and recreation. There is no transport of goods via the ports.

The places Thames , Whitianga and Pauanui have smaller runways from which single-engine planes can climb. Regular flights to other airports in the country do not take place.

The east coast in particular is very popular with tourists and some of it is well developed. Attractive and well-known places are the thermal springs at Hot Water Beach , the coastline with Cathedral Cove and the numerous beaches spread over the east coast.

The places Whangamata , Pauanui and Whitianga have a marina and are popular as a starting point for sailing tours.

The extensive mountain landscape of the Coromandel Peninsula is covered with a subtropical rainforest.

On the east coast, the Whanganui A Hei ( Cathedral Cove ) Marine Reserve has been designated a marine reserve in which fishing is prohibited and boating is only permitted under certain conditions.

On the Coromandel Peninsula , the endangered species are at some beaches of Mornellregenpfeifer to find that in New Zealand Dotterel or Māori Tūturiwhatu be mentioned. About 2000 specimens still live on the beaches.