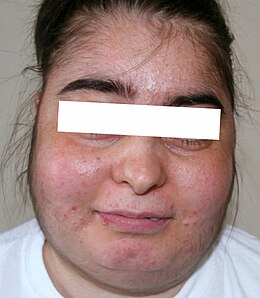 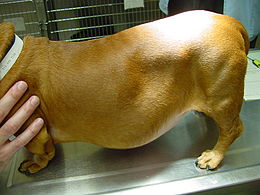 Cushing's Syndrome in a Dog

The Cushing's syndrome [ ˈkʊʃɪŋ- ] is an excessive concentration of glucocorticoids ( cortisol ) in the blood, among other things with increased blood sugar level and with chronic form typical changes in body shape. It was named after the US neurosurgeon Harvey Williams Cushing , who first described it in 1910. The name after Cushing was proposed in 1942/43 by the American endocrinologist Fuller Albright . In addition to Cushing's syndrome I described below, other Cushing syndromes have also been described, which are sometimes referred to as Cushing's syndrome II and III.

Some places in the wikitext are marked with <! - SOURCE? ->

When Cushing's syndrome is physical changes caused by high cortisol levels in the blood (hypercortisolism) are caused. This is characterized by an increased blood sugar level and a partial suppression of the immune system . The disease can develop gradually over the years, with fatty tissue typically accumulating on the trunk of the body and the limbs becoming thinner due to muscle wasting.

A basic distinction is made between endogenous and exogenous Cushing's syndrome. The latter is much more common and is caused by external influences, especially the long-term use of glucocorticoids (mainly cortisone ).

Endogenous Cushing's syndrome affects women up to four times more often than men and can occur at all ages. The adrenal cortex produces too much cortisol without being stimulated (adrenal cortex autonomy). However, if the adrenal cortex is stimulated by the stimulation hormone ACTH because there is a tumor of the pituitary gland , the disease is called Cushing's disease .

The causes of Cushing's syndrome can be:

If Cushing's syndrome is suspected, it must first be clarified whether medication containing cortisone has been taken. Corresponding hormone levels can be determined using blood, urine and saliva samples. Above all, the dexamethasone inhibition test and the CRH test can detect a disruption in the release of adrenal hormones. It also looks for tumors or adenomas that could cause endogenous Cushing's syndrome. Computer or magnetic resonance imaging is used to look for changes in the pituitary gland and adrenal glands.

Differentiation of pituitary-adrenal-ectopic
1. CRH test : 100 µg corticotropin releasing hormone as an iv bolus; Measure ACTH and cortisol before CRH and after 30, 60, 90 and 120 minutes.

2. Liddle test : 0.5 mg dexamethasone po every 6 hours for 2 days, then 2 mg dexamethasone every 6 hours for 2 days. Daily cortisol excretion in the urine and in the serum cortisol concentration on days 3 and 5 at 8 a.m.
3. Sinus petrosus sampling : Catheters in the inferior petrosal sinus on both sides. ACTH, cortisol and possibly prolactin simultaneously from the petrosal sinus left and right and from the peripheral vein before and 2, 5 and 10 minutes after CRH.

The difficulties of finding a diagnosis are presented using a case study in the NDR broadcast Adventure Diagnosis .

In the specialist literature, the Cushing threshold dose is given with the strength of 7.5 mg prednisone or 30–40 mg (in men), 15–30 mg (in women) cortisol per day.

In children, the Cushing threshold dose is 6 mg / m² body surface area / day of prednisone equivalent (prednisone is about four times as effective as cortisol). This describes the daily maintenance dose that should not yet trigger Cushing's syndrome. However, this information is to be understood as a rough guideline, as there are considerable inter-individual differences. There is no absolute lower limit below which glucocorticoid therapy can be considered safe. Topically applied (on the skin) glucocorticoid preparations are most likely not to cause Cushing's syndrome, as they only penetrate the skin barrier to a very small extent. Nevertheless, it is recommended to limit the therapy to a maximum of 20% of the body surface and to be cautious when using it on the face or eyes.

Therapy depends on the cause of Cushing's syndrome: adenomas of the pituitary or adrenal glands are surgically removed; The treatment of choice for adrenal hyperplasia is adrenalectomy and subsequent lifelong hormone substitution to prevent Addison's disease . A Nelson tumor can then develop as a complication .

In January 2020, the EU Commission approved Osilodrostat (trade name: Isturisa , manufacturer: Novartis ) as an oral treatment for adult patients with endogenous Cushing's syndrome. Osilodrostat is an inhibitor of the body's own cortisol biosynthesis.

Cushing's syndrome II is a rare disease in which a tumor in the pons or cerebellum causes damage to the cranial nerves VI , VII and VIII on the same side . Deficiency symptoms of the cerebellum and signs of intracranial pressure are also described in the context of this disease. The current name is cerebellar bridge symptoms .

It was first described in 1917 by Harvey Williams Cushing .

In veterinary medicine , Cushing's syndrome occurs primarily in horses ( equines Cushing's syndrome ), in dogs ( canine Cushing's syndrome ) and rarely in cats (feline Cushing's syndrome ). Typical laboratory changes are a stress leukogram , elevated liver values ​​( ALT and ALP ), elevated blood sugar levels , high cholesterol levels and a low specific gravity of the urine . The treatment of the disease is usually carried out with drugs that lower the cortisol production in the adrenal cortex. The agent of choice for the dog is trilostane . Treatment with the DDT derivative mitotane and also with the antimycotic ketoconazole is possible.