This article deals with the registration authority for domains DENIC. For the US sociologist of the same name of Yugoslav origin, see Bogdan Denitch .

The DENIC (short for De utsches N etwork I nformation C enter ) is a registered cooperative based in Frankfurt am Main . Your tasks are the operation and administration of the top-level domain .de and all associated activities. In 2004 she also set up the first root name server in Germany in cooperation with DE-CIX . 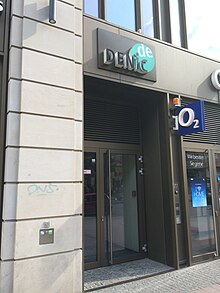 After the introduction of .de on November 5, 1986, the top-level domain was initially administered by the IT Computer Operations Group (IRB) of the University of Dortmund . This was followed in 1994 by the University of Karlsruhe , which had a contract with the so-called German Network Information Center (IV-DENIC). Almost two dozen German Internet service providers were united in it. Due to the steadily increasing demand for .de domains, a cooperative was founded in December 1996 to create a reliable legal framework for the operation of the German top-level domain. In contrast to other organizations, such as Verisign for .com and .net , DENIC was conceived as a non-profit organization from the start .

After setting up an office in Frankfurt am Main by July 1997, DENIC gradually took over all .de-related tasks. This includes in particular the relocation of the name servers from Karlsruhe to Frankfurt am Main in August 1998. The official takeover of the top-level domain by DENIC took place on January 1, 1999, and in October of that year the one millionth .de domain was registered. Within two years, the number of .de domains rose from one to five million with more than 150 members. The growth flattened in the following period, but settled at a relatively stable level of an average of one million per year.

In 2002, DENIC began introducing ENUM technology, with which telephone numbers can be mapped onto domains. In May of that year, test operations began for the address zone 9.4.e164.arpa , which had previously been approved by the ITU office for technical standardization. Due to the legal uncertainties, DENIC concluded a contract with the regulatory authority for telecommunications and post in August 2003 in order to provide a correct framework for the introduction of ENUM. The test phase itself ended in autumn 2005.

Also in 2005, DENIC took a step towards greater internationalization : the cooperative announced that it would apply for .net , which had previously been managed by Verisign and advertised again. At the general assembly in November 2005, a majority of the members voted to apply for the generic top-level domain, even though the secrecy of the process was criticized. However, DENIC was ultimately unable to prevail: In an evaluation by ICANN, the cooperative only came in fourth out of five places. For example, the planned locations for the .net name servers were rated negatively.

In April 2007, Sabine Dolderer resigned from the DENIC board of directors after having headed the cooperative for several years. At that time, differences about the further direction of DENIC were named as the reason. As a result, two members of the supervisory board resigned, whereupon Dolderer resumed her original position in September of the same year. On September 23, 2013 Dolderer announced her final withdrawal from the DENIC boardroom.

A judgment from April 2008 was also significant for the history of DENIC: The Higher Regional Court of Frankfurt am Main decided that the cooperative had to allow Volkswagen to register the domain vw.de , even if the DENIC guidelines actually require at least three characters . After a reopening of the proceedings before the Federal Court of Justice was rejected, DENIC was forced to open up the allocation of two-digit domains to everyone. This took effect on October 23, 2009, and pure numeric domains were also approved for the first time.

The Supreme Court ruled in two legal disputes in which the DENIC was involved, fundamental questions about the seizure of an Internet domain . In 2005 he decided that a domain could be seized, in 2018 he decided how this seizure would work.

In 2007, DENIC's office operations and data center were spatially separated. The latter was opened in September 2007 at a new location that has a direct connection to the DE-CIX hub . At this point in time, eleven million .de domains were registered, which could be transferred to the new data center without disruption. To ensure fail-safe operation, a mirror was also set up in Amsterdam by 2008 , which can serve as a replacement for the German data center in the event of problems. According to their own statements, Amsterdam was chosen as the location because it is far enough away to survive disasters in Frankfurt am Main, but still close enough for DENIC technicians to be able to reach them without any problems.

Theoretically, any company that wants to register .de domains or provide related services can become a DENIC member . The only prerequisite for admission to the cooperative is that an interested party is economically linked to a maximum of two other members and that there are no doubts about financial stability .

DENIC has almost 300 members. These include practically all of the major national and international Internet service providers , for example Deutsche Telekom , United Internet , Strato , Vodafone Germany and Verizon Germany .

DENIC was repeatedly accused of a lack of transparency in its decisions - also from among the members of the cooperative. The criticism culminated in July 2005 in the form of an extraordinary general assembly in which the then acting supervisory board was to be voted out. Corresponding motions were rejected by a majority, but the members decided to change the statutes for the composition of the board . Since then, honorary board members have also been directly elected by the General Assembly.

A poor information policy was also the reason for criticism in the so-called NASA project (.net-Application and Strategic Alternatives): Although a majority of the members voted for the application for .net in 2005 , DENIC did not disclose the decisive details of its application to the public. One of the reasons given was that the competitor Verisign - itself a member of DENIC - could possibly have gained an advantage as a result. Only after massive pressure did DENIC announce further details in February 2005.

After one and two-digit addresses and pure numeric domains were released, it was criticized that DENIC had not carried out the allocation fairly. The registry had introduced a limit of a maximum of four orders per minute for each member, but this could be overcome through cooperation between several registrars and technical problems without DENIC intervening. In November 2009, an internal notification was sent to WikiLeaks , in which background knowledge about the procedure became public, whereupon DENIC justified its approach again. Some problems, for example with the Exim mail server , were admitted.

In 2010 DENIC came under fire after several million .de domains could not be reached. The reason was a technical breakdown in the operation of the registry's name servers , so that they had received an incomplete zone file . For a large part of all .de domains it was reported that the corresponding address was not registered at all. DENIC was only able to correct the error after two hours; the hesitant communication of the failure was warned.

Due to repeated criticism from data protection officials, DENIC introduced a new Whois concept on May 25, 2018 .