.de is the country-specific top-level domain (ccTLD) for the Federal Republic of Germany . It was delegated to the IANA on November 5, 1986 and initially administered by the University of Dortmund . DENIC , headquartered in Frankfurt am Main , has been taking on this task since 1996/1997 . With more than 16 million registered domains .de is the fourth largest top-level domain after .com , .cn and .tk .

On November 5, 1986, .de was registered by the IANA as a top-level domain for Germany in the root zone of the Domain Name System in accordance with ISO 3166 . Since this day .de domains can be registered. In March 1988, the Network Information Center located at the University of Dortmund at that time recorded a total of six .de domains: dbp.de , rmi.de , telenet.de , uka.de , uni-dortmund.de and uni-paderborn.de .

Since 1997, the management of all .de domains has been in the hands of DENIC , which was established a year earlier. Numerous web hosts have joined forces in the cooperative , which in turn act as accredited registrars for .de domains. In addition, DENIC itself offers .de domains under the name DENICdirect . However, this does not include web space , email addresses or other services. 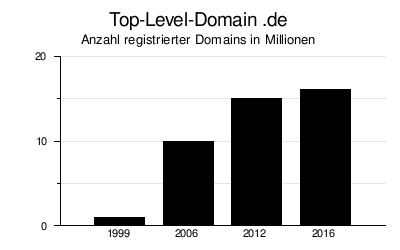 With 16.45 million registered domains .de is one of the most frequently used country-specific top-level domains , behind .cn ( People's Republic of China ) with 20.6 million (as of February 2017) registered domains, but ahead of .uk . When considering all addresses - i.e. both country-specific and generic domains - .de ranks fourth behind the top-level domains .com , .tk and .cn. The mark of 15 million .de domains was exceeded in April 2012, and since June 2006 there have been more than 10 million addresses. The first million was reached on October 5th, 1999.

DENIC eG publishes statistics on the regional distribution of .de domains every year. In Germany, the metropolitan areas of Berlin , Munich and Hamburg stand out with the most domains per capita. However, these statistics are falsified by the headquarters of the major web hosting providers. B. the district of Starnberg on the second place of the regions with the most domains per inhabitant, since the company united-domains is based here . As with most country-specific top-level domains, .de domains can also be registered by people from abroad. For registrations from abroad, the USA , Great Britain and Switzerland are at the top.

A .de domain can be between one and 63 characters long. For a long time, domains had to be at least three characters long, which changed when the criteria were liberalized in 2008. In addition to alphanumeric characters , all German umlauts , the Eszett and various characters in other languages ​​can be used according to the official DENIC list. In their Punycode spelling, these are counted towards the maximum permitted length. Hyphens , more precisely hyphen minus , are possible, but neither in the first nor last position of the domain. A hyphen cannot appear in the third and fourth position at the same time. Domains that are formed with hyphens represent the largest group and since 2001 it has always accounted for more than half of all domain names.

In order to register a .de domain, the future owner does not need a place of residence or a branch in Germany. If the domain owner is not based in Germany, DENIC can ask them to name a person with an authorized recipient who is based in Germany within two weeks . Furthermore, for a domain delegation, at least two name servers must be named during registration , which answer authoritatively for the respective .de domain. Alternatively, DENIC offers under the name NSentry to include up to five A or MX entries for a domain directly in the .de zone.

A .de domain is registered for an unlimited period, the fees are usually due at least one year in advance. This applies both to the assignment by DENICdirect and an accredited registrar. If the registrar gives up the administration of a .de domain without deleting it, it is put into the so-called transit state. This enables the owner to transfer it to another domain name registrar or to have it managed by DENICdirect. Alternatively, the deletion can also be initiated.

Since December 3, 2013, a .de domain cannot be registered by third parties immediately after deletion: A so-called Redemption Grace Period (RGP) has been introduced, as it has been with other top-level domains such as .com since 2002 is common. It grants the owner a 30-day cooling off period, during which the deletion can be withdrawn. This is to prevent the accidental deletion of a .de domain.

By AuthInfo .de domains are protected from unauthorized transfers. Such a character string is generated by the previous registrar (domain host) upon request by the owner or his legal representative . This is now given to the new registrar, usually in a web application, and only then enables the domain to be moved. The same applies to the change of owner itself. The procedure is considered the standard in the industry and was tested from 2008 and finally implemented by DENIC in February 2010.

In addition, the top-level domain .de has been supporting the DNSSEC process since spring 2010 . This is to ensure that the authenticity and data integrity of the domain name system is guaranteed and that queries from a client and the response from the DNS server cannot be manipulated. After a test in July 2009, DNSSEC was first put into operation for .de in January 2010. For this, DENIC was supported by the Association of the German Internet Industry (eco) and the Federal Office for Information Security .