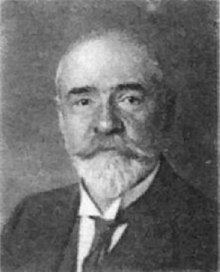 Burlage was the son of the mill owner and mayor August Burlage (1836-1918) and his wife Friederike geb. Lohmann (* 1833). After graduating from high school in Vechta , Burlage, who came from the Oldenburg part of the Münsterland , studied law in Tübingen , Leipzig and Göttingen . During his studies he joined the AV Guestfalia Tübingen , later also the KDStV Burgundia (Leipzig) , both in the CV . He passed his first state examination in law in 1884 and joined the Oldenburg judicial service as an auditor . The second state examination followed in 1887. He then became a judge at the District Court of Friesoythe . In 1891 he moved to Oberstein in the then Oldenburg principality of Birkenfeld and in 1895 to Jever . There he was promoted to chief magistrate in 1896. From 1898 to 1903 he was a judge at the district court of Oldenburg . In 1903 he became a higher regional judge and he came as a judge at the higher regional court in Oldenburg . In 1907 he took over the 1st civil senate at the Imperial Court in Leipzig as a Reich judge . Burlage published several legal treatises.

Eduard Burlage was married to Emma geb. Kruthoffer (* 1860). The marriage had seven children, including Maximilian and Theo Burlage .

Burlage belonged to the center and was deputy party chairman and legal policy spokesman from 1919 until his death. He was repeatedly discussed as a candidate for the office of Reich Minister of Justice .

Burlage had been a member of the Oldenburg State Parliament since 1896 . There he was particularly committed to the construction of new railway lines in southern Oldenburg. As the successor to Ferdinand Heribert von Galen , he was elected for the first time in 1903 for the constituency of the Grand Duchy of Oldenburg 3 ( Delmenhorst -Vechta-Cloppenburg) in the Reichstag of the Empire. He resigned both mandates after his appointment as Reich judge in 1907. In 1919/20 he was a member of the Weimar National Assembly and in June 1919 played a key role in the coalition negotiations that made the Weimar school compromise possible. Then he was again a member of the Reichstag for the constituency of Weser-Ems until his death .