The individual grave culture (EGK; Danish Enkeltgravskultur ) lasted from 2800 to 2300 BC. It belongs to the cord ceramic groups of the end Neolithic .

The area of ​​individual grave culture extended from southern Scandinavia through Denmark , northern Germany and Poland to the Baltic states .

The EGK is preceded in the north by the northern group of the funnel beaker culture (TRB) from around 4200 to 2800 BC. Chr.

In the Middle Elbe-Saale area, the EGK belongs to the transition phase between the late Neolithic and the early Bronze Age, the end of the Neolithic . Here it occurs at the same time as the older Saaleschnur ceramics , the Schönfelder Nordgruppe and the bell beaker culture (GBK; 2500 to 2000 BC). On influences of the bell beaker culture z. B. include squat mugs, line bundle decorations and herringbone patterns. Influences of the Aunjetitz culture (cone cups) show cup shapes with a hanging belly.

In the north it passes into the late Neolithic (SN). In the north-east, further ceramic groups join with the Oderschnurkeramik in the Oder estuary and the boat ax culture in southern Sweden.

The name single grave culture was introduced in 1892 by Johanna Mestorf . In it the differentiation of the EGK, with its individual burials in or under burial mounds, from the previous funnel cup culture (TBK) with its collective burials in megalithic graves becomes clear.

The representatives of the individual grave culture are peasant cultures that are determined by agriculture and animal husbandry. Mainly emmer , einkorn and barley were grown.

In a cup of the oldest single grave culture from a sloping hill by Refshøjgård in the parish of Folby in East Jutland , a crust that had not been charred was examined using pollen analysis , conventional microscopy and scanning electron microscopy . The starch granules identified indicate beer . Since barley was predominantly cultivated in the early EGK, it follows that the drinking vessel in all probability probably contained a beer brewed from barley. The analysis result indicates that no honey or mead was mixed with the beer .

Ceramics of the single grave culture 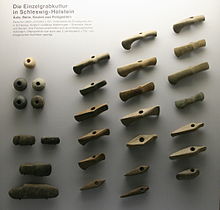 Axes, hatchets and club heads of the individual grave culture

Initially there were almost only individual burials as body burials and rarely as cremations, in stark contrast to the previous funnel cup culture (TBK). The most common for the area of ​​distribution is initially the grave sunk into the ground and vaulted by a flat hill, next to it there are hilly flat graves . In North Jutland , wooden wooden chamber graves ( Danish træbyggede gravkiste ), grave boxes and circular graves ( Danish Cirkelgrave ) are added later.

A principle of this North Jutian form was the reusability and the associated transition of initially only parts of the culture from the individual grave that gave the name to the collective grave of the previous funnel cup culture . Individual grave and bell beaker culture show their influences in large stone graves wherever the cultures spatially touch the spread of the megalithic complex. If you add the shards that were recovered from the disturbed facilities, you have to state that the EGK is represented in at least half of all large stone graves.

KW Struve (The Individual Grave Culture in Schleswig-Holstein) relies for its chronology on a division of the graves into underground time, ground burial time and upper burial time. He assumes that the graves were created higher and higher in the course of the EGK (based on the ground level).

There are often side stools and seldom stretched burials. The predominant grave orientation is east-west. Mostly a cup and amphora and almost always a stone ax.

For the EGK, there are no studies covering the entire area, only regional studies:

First elaboration of the cultural phenomenon in Jutland

for the island Danish area

First processing and naming of the culture

Comprehensive presentation with national significance through