The various forms of local government in Spain are grouped under the name entidades de carácter territorial . While the Autonomous Communities also have extensive legislative powers, the provinces, islands, comarcas and municipalities as entidades locales territoriales are bodies of local self-government. In detail this includes:

The mancomunidades (special purpose associations) and the partidos judiciales (judicial districts) are not local authorities .

The 17 autonomous communities came into being after the end of the Franco dictatorship and the adoption of the democratic constitution of 1978 in the years 1979 to 1983 through the adoption of their statutes of autonomy. They have extensive legislative and executive competencies and their competencies are comparable with the German federal states, but unlike these are not member states . Around half of the public sector employees belong to the autonomous communities.

The autonomous communities have a parliament and a government headed by a prime minister elected by parliament.

The most populous autonomous community is Andalusia with over eight million inhabitants. La Rioja has the fewest inhabitants (approx. 300,000). In terms of area, Castile-León is the largest autonomous community with over 94,000 km² and the Balearic Islands with almost 5000 km² the smallest. The average population is 2.8 million, the average area is almost 30,000 km².

In the official statistics of the European Union, they form the NUTS 2 level. 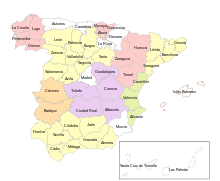 Provinces (in surface colors: the provinces in which a diputación provincial or diputación foral exists as a self-governing body)

Only the Diputación Provincial has its own legal personality as a self-governing body, while the Subdelegacion del Gobierno is a dependent part of the general state administration.

As a result, only the 41 provinces of the autonomous communities of Galicia , Basque Country , Castile-León, Aragon , Catalonia , Extremadura , Castile-La Mancha , Valencia and Andalusia remain as local authorities .

The Council of the Diputación Provincial consists of members elected indirectly on the basis of the results of the municipal council elections in the province.

Only in the three Basque provinces of Álava , Guipúzcoa and Vizcaya is the Provincial Council ( Junta General ) directly elected. The diputación provincial is called diputación foral in these provinces .

In the official statistics of the European Union, the provinces make up the NUTS 3 level.

There are seven Cabildos Insulares on the Canary Islands ( Tenerife , Gran Canaria , Lanzarote , Fuerteventura , La Palma , La Gomera , El Hierro ), and three Consejos Insulares ( Mallorca , Ibiza , Menorca ) on the Balearic Islands . The island of Formentera consists of only one municipality, there the municipal council also performs the tasks of the Consejo Insular .

In terms of their size, the comarcas are roughly comparable to rural districts in Germany, i.e. they form an administrative level between the municipality and the province. Most of the statutes of autonomy provide for the establishment of comarcas as local authorities. So far, however, this has only been implemented in Catalonia (area-wide; 41 comarcas ; established from 1988 to 1991), Aragon (area-wide except for the greater Saragossa area ; 32 comarcas ; established from 2001 to 2004) and Castile-León (only the Comarca El Bierzo ; established in 1991). There are also seven cuadrillas in the Basque province of Álava , which were set up between 1992 and 1994 and are comparable to the comarcas in the other regions.

Number of municipalities by number of inhabitants (as of March 10, 2010)

The basic local self-governing bodies are the municipalities ( municipios ), of which there are over 8,000 in Spain (compared to Germany: approx. 11,000). The average number of inhabitants per municipality is around 5800. The two municipalities with the largest population are Madrid (3.2 million) and Barcelona (1.6 million). There are a total of 63 large cities with more than 100,000 inhabitants. The high number of small communities is characteristic, around 1,100 communities have fewer than 100 inhabitants. In nine provinces in the northern Spanish regions of Castile-León, Castile-La Mancha and Aragon, the average population per municipality is less than 1,000 inhabitants.

Average number of inhabitants per municipality by province (as of January 1, 2012)

As in Germany, there are municipalities which, for historical reasons, are called ciudad , city or villa . The totality of the institutions of a municipality (mayor, municipal council, municipal administration) is usually referred to as ayuntamiento (Catalan: ajuntament , Galician: concello , Basque: udala ), e.g. B. Ayuntamiento de Madrid .

The two autonomous cities of Ceuta and Melilla in North Africa , which do not belong to any autonomous community or province, have a special position .

In the municipalities, especially the larger cities, there are often urban districts under the names distritos , barrios, etc. B. the local districts in Germany do not have their own legal personality and are therefore not local authorities.

In addition, the so-called Entidades de ámbito territorial inferior al municipal (EATIM) also exist below the municipal level . Closed localities can be constituted as such, provided that these are not the main town of the municipality. EATIM have their own legal personality, which means that they are corporations under public law. However, they only have very limited competences, which is why they - due to a lack of territorial sovereignty - are not to be regarded as regional authorities. In Spanish law, too, they are only referred to as entidades locales 'local authorities', but unlike the municipalities, they are not referred to as entidades locales territoriales 'local authorities'. In theory, every closed settlement can be constituted as an EATIM. For historical reasons, however, they do not exist nationwide and are distributed very differently from region to region: of the total of around 3700 EATIM, around 2200 are in the Autonomous Community of Castile-León .