Vehicle recycling describes the process of disposing of vehicles and the resulting recovery of raw materials . In western industrialized nations and in most other countries in the world, a large proportion of metals are now recycled in this way .

Vehicles that have had an accident or are defective and that are no longer economical to repair and vehicles that are no longer roadworthy are usually accepted or purchased by a local car recycling company and finally scrapped. The end-of-life vehicle ordinance now obliges car manufacturers to take back vehicles. 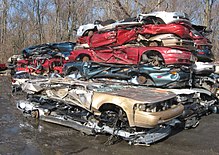 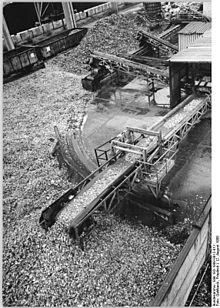 For this purpose, the vehicles accepted are assessed and the corresponding proof of disposal is issued.

According to the End-of-Life Vehicle Ordinance , the operators of dismantling companies are obliged to remove the batteries from each old vehicle immediately after delivery, to handle the liquid gas tank properly according to the manufacturer's specifications and to either dismantle the pyrotechnic components by trained specialist personnel according to the manufacturer's specifications and dispose of them in approved systems to leave or to render harmless by triggering in the installed state.

Before further treatment, operators of dismantling facilities must remove the following operating fluids and equipment and collect them separately: fuel (this also includes liquefied petroleum gas for vehicle propulsion), coolant, brake fluid, windscreen washer fluid, refrigerants from air conditioning systems (CFCs, etc.) and oil filters. This also applies to engine oil, gear oil, differential oil, hydraulic oil and shock absorber oil, provided the shock absorbers are not dismantled; these oils can be mixed with one another, provided they are to be assigned to collective category 1 according to the provisions of the waste oil ordinance.

The next step is the expansion and storage of salable used parts, e.g. B. commonly traded units, such as engine , gearbox , alternator and axle parts, for the purpose of repairing other vehicles of the same type. The interior fittings such as seats, shelves and door panels as well as body parts such as hoods and doors or the electrical equipment ( headlights , taillights , switches ) are removed and stored for sale. Often, however, only the large units are removed by the recycling company; He leaves further expansions to the customers who want to buy parts. Completely dismantled parts (some of which have been functionally tested) are also higher in the purchase price, whereas doing it yourself saves costs.

The "cannibalization" of vehicles is becoming increasingly unattractive in Germany. The reason for this is the rapid change in models and products in the automotive industry , the constantly evolving electronics and the shorter shelf life of spare parts. Another reason is likely to be the considerable export of used vehicles to European and non-European countries, which reduces the domestic demand for spare parts from old vehicles. The scrap metal recovered from vehicle recycling is ecologically and economically sensible and fed back into the raw material cycle (see end-of-life vehicle recycling rates ).

Then the vehicle has reached a certain degree of disassembly it will endverwertet: The usual in Germany form of auto scrap is that of recyclable parts freed automobile by means of a press to compress it and with the aid of a shredder to shred. This makes the further transport of the vehicle wrecks to steel-producing companies or shredder plants cheaper.

In Germany there are around 65 shredder companies that fractionate the vehicles in shredder systems. Steel scrap is separated using magnets, non-ferrous metals and plastics are separated into raw materials using sink-float systems or air sifting . The entire automobile is put into a shredder ( hammer mill ) and torn into fist-sized pieces. In various downstream separation stages, the materials are separated into the fractions (magnetic) metals, light metals and plastic or shredder light fraction. The residues from recycling, called ASR , are either taken to a waste incineration plant or deposited in a landfill .

The shredded scrap is returned to steel works for the production of new steel, the single-type steel is used as cooling scrap in steel production. Due to European legislation, extensive pre-treatment is now necessary before a vehicle is shredded. Unclean mixed scrap can have a significant impact on the quality of new steel. Prices for scrap and its recyclable raw materials vary widely. The raw materials in cars are also a target for dealers and recyclers. The amount of scrap iron and steel in all vehicle recycling operations exceeds that of other metals many times over. For example, iron and steel scrap from vehicle recycling is fed to the steel industry as secondary raw material, more than 50% of which is now covered by scrap waste.

According to the statistics published by Eurostat, around half a million cars (M1) and light commercial vehicles (N1) are used as end-of-life vehicles in Germany. In 2009 - the year of the scrapping premium - there were 1.78 million old vehicles.

Total number and weight of scrapped vehicles in Germany

The Federal Ministry for the Environment and the Federal Environment Agency assume a total of 2.86 million permanent closures in their report for 2014. Only the 512,163 listed in the table above are treated as end-of-life vehicles in Germany. For a further 1.49 million exports can be assumed to be statistically documented, which is documented either by the foreign trade statistics or the notification of re-registrations abroad. In addition, there is an "additional estimate" of exports that are not statistically recorded. However, the whereabouts of 540,000 of these final closures has not been clarified.

The ELV since January 1, 2015 calls for a recovery rate (recycling + recycling + energy recovery) for old vehicles by at least 95 percent by weight and a recycling rate (recycling + recycling) of at least 85 percent by weight. However, the calculation method prescribed by the EU leads to problems if the end-of-life vehicles are not recycled in the same year as they were accepted (and the certificate of destruction was issued). As a result, the recycling rates reported to the EU have been more than 100% since 2010. The Federal Ministry for the Environment and the Federal Environment Agency have therefore created an alternative calculation in their report for 2014 in order to correct this effect and thus arrive at the recycling rates shown above.

Almost 60 percent of all scrapped cars in Germany are made up of five car brands:

These brands make up 48% of the vehicles registered on Germany's roads.

In Germany, a car is scrapped after an average of 18 years. However, there are clear differences between the individual car brands. For example, the statistical lifespan for Volkswagen at 26 years is much longer than for models from Alfa Romeo , Lancia and Kia at just 14 years. Other types of motor vehicle such as caravans at 33, motorcycles and scooters at 29 and trucks at 25 are significantly more durable than cars. 92% of all scrapped end-of-life vehicles in Germany are cars. No type of vehicle is scrapped more often in Germany.

In the case of illegally disposed of vehicles, authorities use the chassis number to determine the last owner 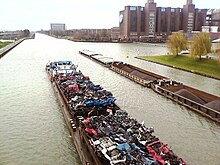 Scrap cars on a barge on the Mittelland Canal in Wolfsburg , in front of the VW plant

If a wrecked car is illegally parked in the public traffic area, the owner will be prosecuted. According to Section 326 of the Criminal Code , the illegal disposal of end-of-life vehicles is a criminal offense. If environmentally hazardous substances are released, criminally relevant cases can be punished with a fine or a prison sentence . The improper disposal of an end-of-life vehicle can be punished with a fine of up to EUR 50,000. The registration office therefore requires the last owner to provide evidence of disposal after de-registering his vehicle. This is issued by the certified recycling company and documents the professional disposal of the old vehicle. If this cannot be presented, the public order authorities assume illegal disposal (e.g. on the roadside) or illegal waste storage (also in private garages, even with long-term restoration projects).

By mid-2008, the recyclers had paid up to 300 euros for a complete old car; the steelworks looked for scrap in the markets. The scrapping premium of the economic stimulus package II paid old car owners 2,500 euros if they had their vehicle scrapped. As a result, the price of scrap fell to a low. Due to the great demand for steel scrap in emerging countries such as China, the price for steel scrap has normalized again.

End-of-life vehicles are classified as hazardous waste according to the Basel Convention and the Waste Shipment Ordinance and may only be exported to OECD countries. Nevertheless, there are repeated reports (for example at Frontal21 on March 31, 2015) that not only used vehicles, but also end-of-life vehicles from Germany are exported to Africa , the Middle East and countries east of the EU. There they are often used for a long time, even though they no longer meet the German requirements in terms of safety and emissions. Many target countries for the export of used and / or end-of-life vehicles have now issued restrictions or bans in order to prevent the uncontrolled import of unsafe and environmentally harmful vehicles.