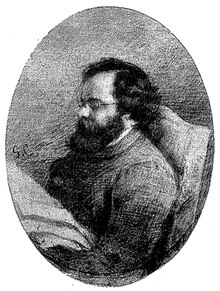 Caroline Unger and François Sabatier, detail from the painting The Artist's Studio by Gustave Courbet (1855)

The grave of Caroline Unger and François Sabatier in Florence, cemetery of the Church of San Miniato al Monte

François Sabatier (born July 2, 1818 in Montpellier , † December 1, 1891 on La Tour de Farges in Lunel-Viel in the Camargue ) was a French scholar , art critic , amateur painter, translator and patron as well as the husband of the Austrian singer Caroline Unger .

As the son of a wealthy landowner who died shortly before the child was born, Marie Jean Baptiste François Sabatier became a student of his uncle, the Abbé Roques. After initial studies in a Jesuit school, he decided to pursue a career as a writer and poet. In 1833 he went to Paris , where his literary talent was encouraged by Alfred de Vigny . He also made the acquaintance of painters such as Paul Chenavard , Auguste Bouquet and Edmond Wagrez . Together with the latter two he traveled to Italy in 1838 and met the painter Henri Lehmann in Rome , whose painting St. Catherine d'Alexandrie portée au tombeau (1839) he acquired (today in the Musée Fabre ). Other acquaintances were Dominique Papety and the sculptor Auguste Ottin , both students at the Villa Medici . Charles Fourier's theories had a great influence on his views at this time .

During his stay in Rome, Sabatier met the famous Austrian singer Caroline Unger through Henri Lehmann , whom he married on March 18, 1841 in the church of Santa Lucia dei Magnoli in Florence . The newlyweds then traveled to Germany, met the poet Ludwig Tieck in Dresden , as well as Franz Liszt (whom François Sabatier had already visited in Rome), and then went to Munich, where Sabatier studied the works of the Nazarenes . Back in Italy, the couple settled in Florence, where Caroline Unger already owned a villa. Around 1845 Sabatier built a palace for himself and his wife in Via del Renai (today the seat of the Florence Bar Association), which was decorated with numerous murals by Sabatier's friends Bouquet and Papety.

In April 1846, the Sabatiers went on a trip to Greece with Dominique Papety , but had to return in July because the health of Sabatier's friend Auguste Bouquet, who had a serious lung disease, deteriorated dramatically and Sabatier once again before his death wanted to see. Bouquet died in Lucca on December 21, 1846 . After the painter's death, the Sabatier-Unger couple took his daughter Louise Bouquet in with them, who married the historian Michele Amari in 1865 .

After the February Revolution of 1848 , the Sabatier couple temporarily moved into an apartment in Paris. In 1851, Sabatier campaigned for the newly growing realistic school of painting in his short-lived magazine Salon de 1851 and particularly welcomed Gustave Courbet , whose friend and patron he became. Courbet painted a portrait of Sabatier in 1854, and he also portrayed Sabatier and his wife, probably in 1855, in his painting The Artist's Studio . The latter was partly created on Sabatier's La Tour de Farges estate, where Courbet also created the painting View of La Tour de Farges in 1857 .

The couple's friends also included the Austrian writer and journalist Moritz Hartmann , who had lived in exile in France since 1848.

After the death of Caroline (1877), François Sabatier married in December 1888 the second marriage to the Alsatian Marie Boll, whom he had met in Karlsbad . In his will, written in July 1890, he bequeathed part of his art collection to the Musée Fabre in his hometown of Montpellier and his books and paintings collection to the Louvre , including many drawings by Papety. He donated 10,000 francs to a retirement home in Neuilly-sur-Seine to help a friend who was staying there.

Sabatier last lived on his country estate La Tour de Farges, where he died on December 1, 1891. He was buried next to his wife in the cemetery of the Church of San Miniato al Monte in Florence.