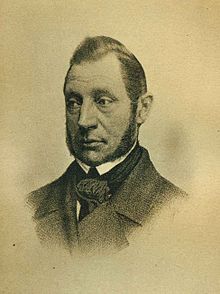 Born the thirteenth child of a pastor, he studied law in Halle (Saale) and became a lawyer . The king appointed him in 1840 to the proposal from the city council to mayor of the city of Brandenburg an der Havel . He was an excellent organizer, perhaps the greatest administrative talent the Prussian state possessed in its day. ( Franz Mehring )

As Lord Mayor, he first issued detailed regulations for the course of business of the magistrate and the municipal council - to clearly delimit the branches of service and to deal with business on time. By tightening the police force , he restored the neglected order in the city and the surrounding area. With the establishment of a forced labor institution (so-called poor house) demanded by the government and strict supervision of work-shy rabble, he emptied the street of beggars and prostitutes . Then he arranged the cash and accounting . His reform of the income tax - at this time the city levied numerous small municipal taxes (sowing, meadows, cattle and a graduated income tax) - led to persistent hostility and denunciations of the city ​​councilors . From the income of the city he organized a communal poor relief .

Franz Ziegler was the first Lord Mayor to put the work of the city administration under a certain amount of public control by publishing the Treasury Act of 1844, thereby making the city government accountable to the population it represents. The first public meeting of city councilors took place at Ziegler's instigation on February 11, 1848 in the pub of the citizens' association (Gems), in which the magistrate could now also take part as part of the public.

In 1848 he was elected a member of the Prussian National Assembly and in 1849 the Second Chamber . The opponent for the constituency of Brandenburg was the later Chancellor Otto von Bismarck . As a member of the Prussian National Assembly he voted the refusal to pay taxes to and was therefore due to high treason and sedition accused and the only one of the participating in the decision imprisonment convicted and removed from office as mayor.

After serving his sentence, he settled in Berlin . In 1864 he was elected a member of the Prussian House of Representatives , in 1867 a member of the North German and in 1871 and 1874 of the German Reichstag . He joined the Progressive Party , from whose party politics he parted only in 1866, before the start of the war between Prussia and Austria , by declaring in a speech in Breslau with determination that Prussia's power and honor would be preserved through a war.

Franz-Ziegler-Strasse in Brandenburg an der Havel bears his name. The street was renamed Kaiser-Friedrich-Straße during the Nazi era.

Mayor of Brandenburg an der Havel