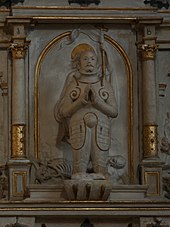 Georg (von) Hahn came, as can be seen from the family coat of arms on his epitaph , the Mecklenburg prehistoric noble family (von) Hahn , who lived on Basedow and only had a nobility pronoun since the Count in the early 19th century. The assignment of Georg Hahn to the Basedow family is based on a wrong interpretation or translation of the name inscription on his epitaph. Partly not identified as a person in art history, despite the Hahn coat of arms in the epitaph, he is assigned to the von Basedow family. Georg Christian Friedrich Lisch , who published the first extensive genealogy of the (von) Hahn family in the 19th century , had no knowledge of this Hahn epitaph in Brandenburg.

Georg (von) Hahn was a son of Kuno I (von) Hahn (1525-1590) on Basedow and Müggenburg from his first marriage to Gödel von Maltzan († 1575). According to the surviving data, Kuno I had two sons named Georg (nos. 265 and 266 of the gender census) among numerous children from his first marriage , but nothing is recorded about their life data. Both died early, Georg I (No. 265) probably soon after his birth, Georg II (No. 266), according to Bernhard Latomus, "studied, but consumption took him off".

In the parish church of St. Gotthardt in the then independent old town of Brandenburg , which has formed one of the medieval city ​​centers of the city of Brandenburg an der Havel since it was united with the new town of Brandenburg in 1715 , Georg's father had a rich epitaph built for his son in memory in the style of the North German Renaissance . This was certainly made before the death of his father Kuno in 1590. It is made of white sandstone , which is partially gold-plated . The burial , resurrection and ascension of Jesus Christ are depicted behind a kneeling figure of Georg Hahn in prayer . Furthermore, the bronze snake and the crucifixion of Jesus as well as 16 coats of arms ( ancestral test ) are worked into the epitaph. The executing stonemason worked his initials ZB into the work of art. The father Kuno Hahn worked as a client on the rich furnishings of the Basedow church , which is attributed to the workshop of Claus Midow , and set a similar epitaph for two other sons in the St. Nicolai Church in Seeburg , in which the older of the two in 1578 is described as an inheritance from the father. Against this background, the wording in the memorabilia of the Brandenburg epitaph "His mother's reason for complaint" suggests that Georg died before her death in 1575. The two epitaphs in Brandenburg and Seeburg commissioned by Konrad Hahn for his sons were created by the Central German sculptor Zacharias Bogenkrantz , who lives in the eastern foreland of the Harz Mountains . Besides his main work, the Renaissance pulpit in the Moritzkirche in Halle, the epitaph in St. Gotthardt is one of the only known ones that he signed with his initials ZB.

The dedication or dedication of the father to the deceased son can be found in a separate panel in the upper area of ​​the epitaph and is in Latin.

The central inscription, the memorabile of the epitaph, is in the lower area and is written in Latin:

This can be done with

"To whom the bird, which with its call separates the times of the night, gave it its name and adorns its coat of arms, Georg, son of Kuno, sleeps in this urn, for twenty years he has added three winters. The Basedow gave the beginning of his fragile life, which hid in the ashes of Alt-Brandenburg. For four years Rostock taught him the arts of knowing God with reason. Here consumption, which afflicted his brave members, promoted the plague that cannot be cured by medical skills. While he now sees with patient hope that a thousand remedies for his pain are sought in vain everywhere, he ends, his father's hope, his mother's complaint, the much-praised fame of his race, his life in praising agony. Before God, with his ancestors and blissful souls, he receives joys that will never perish. "