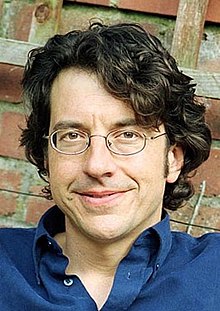 Monbiot at the Make Poverty History rally in Scotland

Monbiot comes from a conservative, wealthy family. His grandfather Gresham Cooke was already a Conservative MP , his father Raymond Monbiot is vice chairman of the Conservative Party , and his mother Rosalie, also Conservative, headed the Oxford district for over 10 years .

Monbiot spent his school days at a private school , the Stowe School in Buckinghamshire . He then studied zoology at Brasenose College of Oxford University .

After graduating, Monbiot worked as an investigative journalist and traveled through countries such as Indonesia , Brazil and East Africa as part of his research . In publications dealing with his travel experiences, he denounced human rights abuses and environmental degradation in regions such as western New Guinea and the Amazon . His activities led some states to declare him persona non grata and he was sentenced to life imprisonment in absentia in Indonesia.

After his return, Monbiot joined the movement critical of globalization. 1995 awarded him Nelson Mandela the Global 500 Award of the United Nations . He also won the Lloyds National Screenwriting Prize for his feature film The Norwegian , the Sony Award for Radio Production, the Sir Peter Kent Award and the OneWorld National Press Award .

Originally Monbiot was involved with George Galloway in the British "Respect" party , but dropped out when Respect decided to run against the Green Party of England and Wales in the 2004 European Parliament elections.

Monbiot is married to Angharad Penrhyn Jones. In 2012 his second daughter was born.

Monbiot considers global warming to be one of the most important challenges facing the generation living now. He made it clear that he also considers the emission of climate-damaging gases to be the decisive factor when deciding for or against power plant technology (including nuclear energy ) or when handling biofuels.

This opinion, seen as an endorsement of nuclear power, sparked a heated debate with British union leader Arthur Scargill . Monbiot continued to advocate the use of nuclear energy after the nuclear accidents in Fukushima (Japan) .

In May 2008, Monbiot personally attempted to arrest former UN Ambassador John Bolton as a war criminal with reference to the UK legal basis of the Nuremberg Trials .