from Wikipedia, the free encyclopedia
This is the spotted version , flagged on August 8, 2020 . There is 1 pending change that has yet to be viewed. 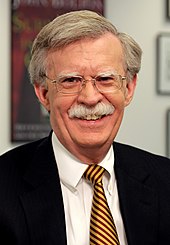 John Robert Bolton (born November 20, 1948 in Baltimore , Maryland ) is an American politician and diplomat . From April 9, 2018 until his resignation on September 10, 2019, he was National Security Advisor to US President Donald Trump .

Bolton is considered one of the architects of the 2003 Iraq War and was the US Ambassador to the United Nations from August 2005 to December 2006 . Bolton has been described as a neoconservative , although he himself rejected this characterization.

Bolton was born in Baltimore to Virginia Clara "Ginny" (née Godfrey), a housewife, and Edward Jackson "Jack" Bolton, a firefighter . He grew up in the Yale Heights workers' community and qualified for the McDonogh School in Owings Mills , Maryland, where he graduated in 1966. He got involved in the campaign of right-wing politician Barry Goldwater in his 1964 presidential election campaign .

During the tenures of Presidents Ronald Reagan and George HW Bush , Bolton initially worked for the US Agency for International Development (USAID) (1981-1983) and then as Assistant Attorney General for the US Department of Justice (1985-1989) and as Undersecretary for International Organizations ( Assistant Secretary of State for International Organization Affairs ) at the US State Department (1989–1993). He also served as chairman of a Republican resolution committee . Prior to joining the Bush administration , Bolton was a neo-conservative senior vice president of public policy research at the American Enterprise Institute . Between 1997 and 2000, Bolton volunteered in a personal embassy of Kofi Annan in Western Sahara .

On March 7, 2005, George W. Bush proposed him as a UN ambassador. On May 12, 2005, the US Senate failed to confirm Bolton, despite a 55-45 Republican majority, because his candidacy was rejected by the Democratic minority and even conservative senators sometimes harshly criticized Bolton. Among other things, he was accused of having put pressure on the CIA to write reports that he liked. In addition, 60 retired US diplomats wrote to the senators against Bolton's nomination. To blockade, the Democrats in the Senate used the tactical voting maneuver of a filibuster , in which applications for the end of the debate were blocked so that Bolton's candidacy could not be voted on for formal reasons. Motions to break the filibuster received 57 and 54 of the 60 necessary votes, respectively. According to observers, if there had been an actual vote, Bolton would have won it, as 51 votes would have been enough.

On August 1, 2005, Bolton was appointed UN ambassador by decree without confirmation from the Senate, because the US Constitution allows the president to fill positions directly during the breaks (" Recess Appointment "). The validity of this appointment expired at the end of the legislative term of the Congress . This was the first time a US ambassador to the UN was used in this way.

On December 4, 2006, the White House announced that Bolton had decided not to serve as Ambassador to the United Nations after the end of the legislature. This was presumably due to the congressional elections , in which the Democrats won a majority in both houses. The Democrats had always spoken out against Bolton as UN ambassador and would presumably not have supported any further candidacy. Alejandro Daniel Wolff took over the post on January 1, 2007 , then officially Zalmay Khalilzad . Bolton's administration was considered aggressive and controversial after he had emerged as a sharp critic of the UN for years; he was particularly committed to the interests of the State of Israel.

In conversation for further offices

In 2011, Republican politician Newt Gingrich announced he would make Bolton Secretary of State if he were to become US President in the 2012 election . After Donald Trump's election as president in 2016 , whose candidacy was previously supported by Bolton, a former protégé of former US Secretary of State James Baker , Bolton was once again considered a favorite for the office.

From 2013 to 2018, Bolton was chairman of the right-wing and anti-Muslim think tank Gatestone Institute . The institute drew criticism for spreading false information and untruths virally.

On March 22, 2018 US President gave Donald Trump that Bolton from 9 April in the wake of known HR McMaster as national security adviser in his government will occur. The Times of Israel saw his nomination as a sign that the Trump administration was heading for a tough line on the side of Israel before the upcoming talks on the Iranian and North Korean nuclear programs . On the question of Russian interference in the 2016 presidential election campaign , however, Bolton - unlike his predecessor in office - expressed doubts about the involvement of official Russian agencies. The Neue Zürcher Zeitung ruled that Bolton's “rigid nationalism” was a perfect match for Trump's America First policy .

In July 2018, Defense Minister Mattis Bolton wrote to urge him to coordinate better with his ministerial colleagues, namely on the current US policy towards Syria , Russia and North Korea. Bolton had not arranged the usual ministerial-level talks to prepare for or follow up on Trump's meetings with Kim Jong-un and Putin , which serve to provide strategic coordination, information and advice to the President.

On September 10, 2019, President Trump asked Bolton to resign. He did not agree with Trump on essential security and foreign policy issues. Shortly afterwards, Bolton submitted his resignation, which he said he had offered to the President the previous evening. President Trump announced a week later that he would appoint Robert C. O'Brien as the new security advisor.

Time after leaving the Trump administration

Beginning in 2020 Bolton announced that he would in the impeachment proceedings against Donald Trump before the US Senate to Ukraine affair testify when the Senate him by threat of punishment will ask to testify.

In June 2020, the US administration under Donald Trump tried to prevent the publication of John Bolton's book The Room Where It Happened , in which he reported on his experiences as a security advisor during Donald Trump's presidency . The book characterizes Trump as incompetent and corrupt. However, a court in Washington rejected an injunction. The government had not adequately demonstrated that a publication ban could still “prevent irreparable damage”, since the book was already in print and international distribution, with sales planned to start three days later.

Bolton is seen as a supporter of an aggressive foreign policy that uses military options (“falcon” instead of “dove”). Bolton replied to his critics that his actions "show clear support for effective multilateral diplomacy ". As a member of the Project for the New American Century , Bolton co-signed an appeal to President Bill Clinton , who in 1998 was urged to overthrow Saddam Hussein through the use of diplomatic, political, and military means. The signatories of the appeal also took the view that “American policy must not allow itself to be further crippled by a misguided compulsion to consensus in the United Nations Security Council ”. In 2000 he said in a radio interview: "If I had to reorganize the Security Council today, it would have exactly one permanent member, because that corresponds to the actual balance of power in the world."

Bolton has repeatedly criticized the United Nations . In 1994 he said in a forum of the Federalist Society : “There is actually no such thing as a 'United Nations'. There is an international community that can only be led by the only remaining superpower, the United States. ”He also said,“ The United Nations building (in New York) has 38 floors, but if it were to lose ten it would That makes no difference either. ”He is also considered a sharp critic of the UN Human Rights Council , whose establishment he described in June 2006, according to press reports, as“ a made-up caterpillar instead of a butterfly ”. Thomas Assheuer commented at the end of 2005 that Bolton gave the impression that he wanted to incapacitate the UN "into a specialist company for post-military aftercare, a Mother Teresa in the hegemon's field hospital ".

Bolton campaigned for the right to allow private individuals worldwide to carry firearms. In his book he justifies this view with the interest of the USA in being able to equip “freedom groups” worldwide. As the UN ambassador, he vehemently opposed agreements on the control of small arms.

At the 2007 British Conservative Party conference , Bolton said of Iran : “The US once had the ability to covertly orchestrate the overthrow of governments. I wish we could have this again. ”In the nuclear deal with Iran of July 14, 2015, Bolton sees a threat to world peace as it does not effectively prevent Iran from building nuclear weapons. Bolton repeatedly called for military action against the Iranian nuclear program. At the end of November 2016, Bolton warned President Obama, who was still in office, against recognizing Palestine as a state during the transition phase.