The Gersthofer Friedhof is a communal cemetery in the Gersthof district of Vienna's 18th district , Währing .

The Gersthofer Friedhof is on the edge of Gersthof on a slope of the Schafberg called Alsrücke . It is located at Möhnergasse 1, directly on the border to the 17th district, Hernals, to the south . Not far from the entrance, tram line 40 , which starts at Schottentor in the city center, has its north-western terminus, Herbeckstraße.

Inspired by the Josephine reforms , a cemetery was built in 1785 at the exit of the village of Gersthof on the mountain side. It was built at the point where Messerschmidtgasse joins Gersthofer Strasse today. Today the parish kindergarten is located on the premises. 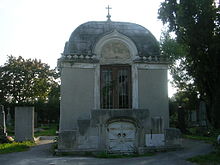 The last re-establishment of the Gersthofer Friedhof took place on a slope of the Schafberg, the so-called Alsrücke, southwest of the place. The cemetery was inaugurated on October 27, 1880. The people who died between the closure of the second cemetery and the opening of the third cemetery had to be buried at the nearby Hernals cemetery . The remains from the second local cemetery were buried in a mass grave to the right of the newly built mausoleum .

In 1892 Gersthof was incorporated into Vienna with other places than the 18th district, Währing . Responsibility for the cemetery was thus transferred to the Vienna city administration.

The third Gersthof cemetery was first expanded in 1899 by an area of ​​20,000 square meters. At the beginning of the 20th century, the construction of an administration building and the adaptation of the existing grave digger's house were approved. In 1903/1904 a waiting hall was built, the conversion of the sanctuary into a chapel, the relocation of the entrances to the infectious mortuary chamber and the installation of a protective roof were approved. The cemetery chapel was consecrated on April 11, 1907 and the cemetery was expanded twice in the 1910s.

After the south side of the cemetery facing Czartoryskigasse was provided with an architecturally structured enclosure wall in 1938, the city administration had the funeral hall renovated between 1945 and 1951 and parts of the cemetery wall renewed.

In 1952 the allocation of new and abandoned graves was stopped. A year later, the Vienna City Council decided to close the Gerstofer Friedhof and other small cemeteries until 1975. In 1957, however, the reallocation of fallen graves was approved on the condition that the right of use would expire at the end of 1975. The local council stopped this new allocation again in 1965, but had the blocking period for the cemeteries concerned extended until the end of 1985.

In a referendum carried out in 1980 , the majority of voters decided in favor of retaining the cemeteries threatened by closure, which is why the local council lifted the closure decision on September 26, 1980. After a confiscation procedure carried out in 1982/1983, new graves could be allocated again. In 1983, the laying out room was reopened after renovation and conversion work.

The Gersthofer Friedhof is also the location of a Russian military cemetery that was made up of a mass grave occupied in 1945. The number of fallen soldiers buried here is not known.

Graves of other personalities

Other personalities who are buried at the Gersthofer Friedhof: