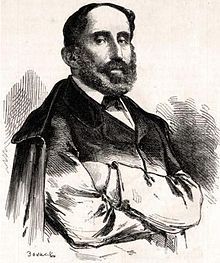 The roots of the noble family of Trivulzio go back to the 10th century. The family derives its name from the village of the same name in western Milan.

Giorgio lost his father early. Fortunately, he maintained a cordial relationship with Giuseppe Vismara, his mother's second husband, Countess Anna Besozzi. Giorgio attended the Jesuit- run college for young nobles in Parma . Napoleon swept away the Jesuits and introduced military customs in the school. The mother suggested that the boy study law in vain. Instead, the wealthy Giorgio traveled to all sorts of European countries until 1821.

Giorgio Pallavicino participated with Silvio Pellico in the 1821 carbonari surveys in Piedmont and was arrested on December 4, 1821. To the skilled examining magistrate Salvotti , he disclosed details that led, among other things, to the arrest of Federico Confalonieri .

Pallavicino was sentenced to death. The Emperor of Austria pardoned the conspirator to twenty years in prison. Pallavicino was serving his sentence in the Spielberg fortress in Brno . He was locked up there with a certain Tonelli, with whom he remained friends. It was moved to the Gradisca fort . There he shared a cell with an old Slavic farmer. This old man had been sentenced to life imprisonment as a robber. Laibach , the last station of the prisons, brought freedom with the death of the emperor in 1835. After another amnesty, Pallavicino returned to Lombardy in 1840 with his young wife, Anna Koffmann, the Prague merchant's daughter, who was twenty-two years his junior, from the forced stay in Prague ordered by the Austrians . The couple had a daughter. Pallavicino saw their marriage.

After participating in the five-day uprising in Milan , he fled to Paris via Switzerland in 1848. On August 1, 1857, he founded the "Italian National Association" with the Venetian Daniele Manin in Turin . Pallavicino sat in the second to seventh legislative periods in the Turin parliament and became a senator there in April 1860.

Pallavicino joined Garibaldi after Manin's death . After the latter had taken Naples in September 1860, he appointed Pallavicino as the city's prodictator. Victor Emanuel II decorated Pallavicino in the same year for his efforts in October 1860 to enlarge the territory of the Kingdom of Sardinia with the Order of Annunciations (see below). Although Pallavicino had acted against Garibaldi's will in that October 1860, Garibaldi was not resentful and made the henchman prefect of Palermo for a short time . Pallavicino was also at Aspromonte at Garibaldi's side in the late summer of 1862, but finally withdrew from politics after the fiasco.

When republicans rose in the Kingdom of Italy in 1869 , the corporal Pietro Barsanti did not want to take action against the population and was sentenced to death. Anna Pallavicino, who wanted to petition Victor Emmanuel II, was not admitted to the king. Barsanti, who refused to obey, was executed. In protest, Giorgio Pallavicino returned his medal of announcements to the king.