Grödel is a district of the Saxon community of Nünchritz in the district of Meißen on the right side of the Elbe . The place was first mentioned in 1324 as Gredil .

The place is located directly on the Elbe between the places Nünchritz and Moritz , from which it is about 1 km away. Across from Grödel on the other side of the Elbe is the town of Leutewitz . The city of Riesa is located about four kilometers northeast of Grödel. At the end of the Elbe downstream, the Elsterwerda-Grödel raft canal flows into the Elbe. The Elbradweg runs through the village. The Vogelberg, a small settlement that borders on Moritz, belongs to Grödel. The place was created on a flood island and is located in a former alluvial cone of the Elbe. In 1900 Grödel is described as a manor settlement with rows of houses and manor block corridors. The district covered 145 hectares.

The place name was repeatedly subjected to changes so Grödel was in 1324 in Gredil called 1425 Crodil and 1529 for Gredel or to Grödell in 1540. Another name variant comes from the year 1558, for the Grödel has survived as a place name.

In 1324 a manor was first mentioned for Grödel and in 1551 a manor was mentioned. The first known bearer of the name is Apecz in 1324 who is called Gredil , in 1425 the owners are Nigkil and Mattis Crodil . From 1464 the von Schleinitz owners are on Grödel. The rule of von Schleinitz ends in 1715 when the manor owner transfers the estate to his sister Eva von Benckendorf .

In 1540 Grödel belonged to a church in Glaubitz. In 1555 it belongs to Zeithain, although the pastor in Glaubitz gives it “7 broth and 7 par eggs”. A school is mentioned. In 1575, Haubold von Schleinitz auf Grödel bought the jurisdiction over Zeithain from Martin von Miltitz auf Riesa as well as the patronage over the church and the right of collision over the parish and school for 100 guilders. From 1930 the place is parish again to Glaubitz. In 1579 the manor is schriftsässig .

Haubold von Schleinitz rebuilt the manor in 1587. Nünchritz, Zeithain, Röderau and Moritz belong to the property. Around 1609 von Schleinitz provided 49 men for defense - 9 with feather spikes and side weirs, 23 with halberds and side weirs, 17 with gag spikes. In 1664 the manor and the 6 thresher houses lay fallow. In 1715 the ship miller had a barge crossing, as did the cottage owner Martin Hänsel.

In 1721, the manor had a ship mill on the Elbe with a grinding gear. This mill seems to have been very profitable, because in 1759 Müller Haacke borrowed money from the judge in Görzig to immediately cover a Prussian war claim against 7 communities. During the pleasure camp of Zeithain in 1730, the Margrave of Ansbach lived in Grödel, which consists of the manor and 6 houses. Between 1740 and 1744 the raft canal was built, which is the longest canal in Saxony at 22 km. In 1748 the first barges are towed on the canal. After 1741, Count von Wolfersdorf acquires the Grödel manor. He knows how to make a profit from his property. In 1819 the Wolfersdorf brothers jointly owned the manor. 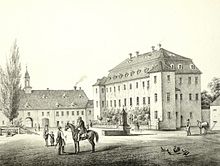 In 1750 the manor was allowed to build a malt, kiln and brewery, brew and give away beer, scrap and otherwise sell it. From 1752 Grödel also had the right to move beer at the raft house. In 1752 the manor received the courts for all the land from the manor to the canal, pool and accessories, excluding the timber administrator. 1776 landowners in Grödel are obliged to help repair the Elbe dam. The location of the place had some advantages. In 1801, crockery and people from the manor on the ferry to Riesa do not pay any ferry fees because the ferry has to stop because of the manor. In 1824 Grödel is described as an old manor with a community of cottagers. The royal timber yard on the Elbe and the canal has a timber management apartment, stable, coal and other sheds. The manorial house of the manor includes 1 farm building, 1 shepherd's apartment, 1 horse and ox barn, 1 cowshed, 1 barn building, a brewery and picnic sheds and 6 threshing houses. All 21 cottagers stand with their belongings on manorial land. A forge is one of them. In Grödel there are 2 mills, a Dutch windmill and a ship mill, both with two grinders and belonging to the same owner.

From 1826, Johann Chr. Große was granted the license to distill brandy, and he was also allowed to serve beer and brandy. In 1828 he was granted permission to host and host, slaughter and serve self-made wine. In 1835 there is the castle of the manor, lime and brick kilns, the 2 ship mills, a windmill, a beet sugar factory and the raft wood yard in Grödel. A little out of the way are three houses that are named after a crow's hut - Vogelberg. Both courts are exercised by the manor. The Grödel students go to school in Langenberg . In 1838 a school building for the United Grödel-Langenberg school community was built in Langenberg, which had to be enlarged several times due to the increased number of students. FG Roßberg and his descendants owned the manor until 1899. The Harz family then acquired it and managed it until 1945. In 1898, the village of Grödel and its manor were manageable. A master blacksmith, a mill owner, a master shoemaker, a cement slab manufacturer and restaurateur, the servants of the manor and a few factory workers and their families make up the population. In 1925 almost all of the inhabitants of Grödel were Evangelical Lutheran , four people were Evangelical Reformed and only one inhabitant was Catholic .

In 1928 the image of the 298 residents of Grödel changed. Workers and farm workers make up the bulk. The craftsmen and traders are in the minority. In 1937 the population grew to 335. The breadth of professions and income opportunities has spread even further and shows that the previous dependency on manor no longer exists. The Grödel volunteer fire brigade was founded in 1941. Saxons came after the Second World War in the Soviet zone of occupation and later the GDR . In 1945 the manor Grödel is subject to land reform and is expropriated. The land was distributed to new farmers and poor people. Around 1948 the manor house of the manor was blown up. At first it housed the kindergarten. After the territorial reform in 1952 , Grödel was assigned to the Riesa district in the Dresden district . The first LPG was founded in 1954 and the second four years later . Grödel was one of the first villages in the Riesa district to be fully cooperative.

In 1970 the construction of Elbstrasse also began on the second side of the street, which began as early as the 1930s and which continues with the construction of further homes. The development culminated in the development of the “Green Angle” from 1998. In 1973 it was incorporated into Nünchritz. After the incorporation, the Grödel children went to school in Nünchritz. In the 1980s, when the Grödelers laid the sewer themselves, the cohesion of locals and newcomers grew. The establishment of the antenna community reinforces this development. After German reunification , Grödel came to the re-established Free State of Saxony. The following regional reforms in Saxony assigned Grödel to the district of Riesa-Großenhain in 1994 and to the district of Meißen in 2008 . In 1998 the village community center Grödel was inaugurated.

In 2002, the August floods caused massive damage to most properties. Due to a breach of the dam, Grödel was surrounded by water. Thanks to extensive support, the people of Grödel had made their place a gem again. The grounds of the manor remained untouched by the flood. As a result of the flood, the hydraulic structure on the canal was upgraded. In June 2013 Grödel was again surrounded by the flood. Again there was damage to the buildings, which is gradually being removed.

The windmill was built in 1803 at the entrance to the town directly on the Elbe. The mill was in operation until 1936, but in its final years it was already powered by electrical energy. For decades the mill stood empty and led a sad existence. 1977 to 1980 the windmill was converted for residential purposes and could be preserved.

Districts of the community of Nünchritz