This article deals with the Neumark and Meissen nobility. For the nobility merged at the beginning of the 19th century, see Von Beneckendorff and von Hindenburg . 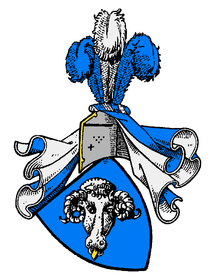 Family coat of arms of those von Beneckendorff

Benckendorf , more often Beneckendorff , occasionally also Benkendorff , is an ancient Neumark and Meissen nobility and not to be confused with the Middle Mark noble family of Benckendorff in Brandenburg or Bayreuth in Upper Franconia .

It is very likely that the name has local references. The extensive interpretation of Ben as a hook (place of justice) or a bear is not credible in relation to "-dorf". There are several Benkendörffers near Salzwedel , Merseburg and in Mansfeldischen . Ben is an abbreviation for the biblical name Benjamin and is derived from the Hebrew term ben for son and jamin for happiness. The first settlers in the Altmark were probably lucky with the chosen form of urbanization or they had found fertile soil early on and were able to secure the survival of the lucky sons , who later gave themselves the name Benkendörffer, through fast, high-yielding harvests .

It is no longer possible to determine whether the two separate lines originally had a single family origin. The geographical proximity of Pomerania and Brandenburg would speak in favor of it, but both coats of arms are fundamentally different and have no uniform heraldic elements, which indicate common ancestors before 1415. The claim that the noble family came from Swabia is not entirely understandable. The von Beneckendorf family was first mentioned in a document in 1280 in the Altmark . In the wake of the Ascanian Margraves of Brandenburg , the Beneckendorff family came to Neumark in the 13th century . Presumably the secret of the separate coats of arms lies here due to the new loaning of at least fourteen manors. Just as Alt- and Neumark were politically separated with decreasing interest of the Ascanians, one might want to protect the family assets against each other. The first reliable genealogical mentions of the Pomeranian aristocratic family are given with Vicke von Beneckendorff (* before 1415 in Wardin ; † after 1476) and come from Wardin and Alten Kliecken (Alten Klüken), which was owned by the family for 300 years until 1740. His son Hans von Beneckendorff (* 1425 in Wardin) had a son Joachim v. B. (* around 1515 in Wardin; † 1565 in the Arnswalde monastery). This Joachim v. B. in turn had three sons Caspar v. B. (* 1521 in Wardin; † in Sweden ), Wolffens v. B. (* 1523 in Wardin; † in Sonneburg, Oststernberg district) and George v. B. (* 1517 in Wardin; † 1589 ibid). Georges v. B. sons were Johann v. B. and Daniel v. B. , who later founded the three other branches of the Beneckendorf nobility. The family branches are divided into the Blumenfeld, the Petznick and the Dieckoischen family branches, of which the latter two soon died out. Due to the lack of descendants, the widely scattered property was converted into a Freiherrliche von Benkendorff Foundation in Ansbach, which still paid pensions to needy people in 1900. 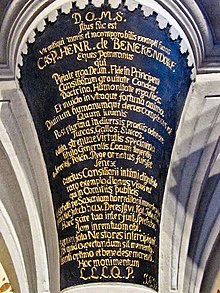 Monument to Caspar Heinrich v. B. in the church in Calbitz near Wermsdorf

The Pammin family branch in Saxony

The founder of this branch is George v. B. , whose son Johann died early and whose descendant Hanß v. B. (* 1558 in Wardin; † 1632 in Friedeberg) was. In the next generation but one, Caspar Heinrich v. B. (* 1650 in Pammin ; † 1759 in Calbitz ) in appearance, who brought the Pomeranian aristocratic name to Kursachsen and at the Saxon court as a royal. Polish and Saxon privy councilor, lieutenant general of the Saxon infantry and hereditary marshal and administrator of the Electorate of Saxony. He was the owner of the goods Alt- and Neuköditz , Skassa , Naundorf (Saxony) , Löbichau and Grödel . He was married to Eva von Schleinitz . His only son Carl Christoph v. B. (* before 1715 in Saxony) had no descendants, so that the nobility line died out in the middle of the 18th century. In the Protestant church in Calbitz, the magnificent monuments of the v. B. has been preserved.

The Blumenfeld family branch in Neumark

Founder is Daniel v. B. and his sons Hanß Heinrich v. B. (Royal Prussian Neumark Regional Director) and Georg Christian v. B. , Neumark district administrator. This in turn had nine sons, including Joachim Christian v. B. (President of the Schivelbeinischer Kreis), the Prince. Oettingian colonel Gustav Adolf v. B. and Achatius v. B , who in 1712 was the Schwarzburger Hofmeister in Rudolstadt and Oberamtmann in Feuchtwangen . Later descendants were the administrative president of Breslau and the Silesian writer Karl Friedrich v. B. († 1788) and through the marriage of President Paul Ludwig Hans Anton von Beneckendorff and von Hindenburg .

The coat of arms bears a (black) horned ram or buffalo head ( Otto Titan von Hefner speaks of an aurochs head). On the helmet with blue-silver covers three ostrich feathers, blue-silver-blue. It was united with the von Hindenburg coat of arms in 1789. There, the silver tincture usually appears in black, as the dark oxidized silver in older depictions was misunderstood as black.