Oskar Wilhelm Robert Paul Ludwig Hellmuth von Beneckendorff and von Hindenburg (born January 31, 1883 in Königsberg , Prussia , †  February 12, 1960 in Bad Harzburg ) was a German lieutenant general and son of President Paul von Hindenburg . Oskar von Hindenburg became publicly known primarily through his influence on his father in connection with the lifting of the SA ban in 1932 and Hitler's appointment as Reich Chancellor in January 1933. 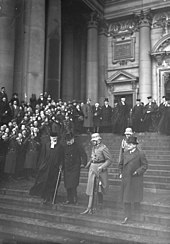 As his father's adjutant, Oskar von Hindenburg usually accompanied the Reich President, here (with helmet) after the celebration of the founding of the Reich on January 18, 1931 from the Berlin Cathedral .

From 1903 he was a lieutenant officer in the 3rd Guards Regiment and was later appointed battalion adjutant . As a general staff officer at the Army High Command and with the staff of the 20th Infantry Division with the rank of captain (since 1914), he took part in the First World War. After the end of the war he was accepted into the Reichswehr and on April 1, 1922 company commander in the 16th Infantry Regiment . After his promotion to major on April 1, 1923, he was employed as a tactics teacher at the cavalry school in Hanover from October .

From May 1, 1925, he acted as an adjutant to his father, the Reich President. While maintaining this position, he was assigned to the staff of Group Command 1 on October 1, 1925 . In the following years he was on February 1, 1929 Lieutenant Colonel and on February 1, 1932 Colonel promoted. On August 3, 1934, he was made available and on September 30, he was adopted as major general at the same time . On July 1, 1938, it was made available again, but without being entrusted with a task. Only with the mobilization on August 26, 1939 was he appointed commanding general of the Deputy Army Corps and Commander in Military District I , shortly afterwards (on October 25, 1939) commander of the division z. b. V. 422, which was absorbed into the 401st Landesschützen Division in March 1940 . On January 10, 1941 he was appointed commander of the prisoner-of-war camps in military district I ( East Prussia ). In this function he was promoted to lieutenant general on April 1, 1942. In December 1944 he was transferred to the Führerreserve , and on February 28, 1945 he was dismissed.

Appointment of Hitler as Reich Chancellor

In his function as adjutant to his father, Oskar von Hindenburg became known to the public through his influence on the Reich President. Particularly when the ban on the Sturmabteilung was lifted in 1932 and Hitler was appointed Reich Chancellor in January 1933, he advocated the National Socialists . Until a few years ago, the legend was circulated that Oskar von Hindenburg belonged to a " camarilla " that prompted Paul von Hindenburg to finally appoint Hitler , who had been reviled as a " Bohemian private ", on January 30, 1933, as Chancellor. In collaboration with Franz von Papen , Oskar von Hindenburg assumed the role of mediator between Hitler and his father, met with Hitler on January 22nd, 1933 in Joachim von Ribbentrop's house and thus enabled the " seizure of power ". Because of this ascribed role as an allegedly influential advisor in the area of ​​the Reich President, Kurt Tucholsky spoke ironically of the "son of the Reich President not provided for in the constitution". However, the research of the Stuttgart historian Wolfram Pyta has shown that Paul von Hindenburg in no way had to be pressured by his son to appoint Hitler. It would also not have fit with Paul von Hindenburg's self-image to let his son guide him on this issue. There is no source from which the alleged influence of Oskar von Hindenburg on his father in relation to Hitler's chancellorship can be derived.

Oskar von Hindenburg (right) with his father during the Reichswehr maneuver near Frankfurt (Oder) , September 1932.

The name of Oskar von Hindenburg also went through the press in connection with the Osthilf scandal in January 1933. In connection with research into the misappropriation of aids by large landowners , it became known that Paul von Hindenburg had given the Neudeck estate, which was given to him as a gift on his 80th birthday (especially by the Agricultural Association and Reichsverband der Deutschen Industrie) to avoid inheritance tax, directly to his son Oskar had overwritten. In addition, the Hindenburgs came under suspicion of misusing public funds. When the matter threatened to escalate into a scandal, Oskar von Hindenburg negotiated privately with Hitler for two hours at the aforementioned meeting on January 22, 1933. According to Otto Meissner's testimony , Hindenburg then said that “there is now no other option” than to make Hitler Chancellor. Hitler is likely to have persuaded Hindenburg with threats and offers to stand up for his chancellorship with the Reich President.

Referendum on Hitler's assumption of the powers of the Reich President

Oskar von Hindenburg drew attention to himself again when his father died on August 2, 1934. In a radio speech on August 18, 1934 on the occasion of the referendum on the following day, he advocated the merging of the offices of Reich President and Reich Chancellor in the person of Adolf Hitler:

“My now eternal father himself saw in Adolf Hitler his immediate successor as head of the German Reich, and I act in accordance with my father's intention when I call on all German men and women to hand over my father's office to the Führer and To vote for Chancellor.
And so the Marschallsturm zu Tannenberg is still shouting these days: 'Get together and stand firmly behind Germany's leader. Shows to the outside and inside that an indissoluble bond tightly encompasses the German people in one will. '"

This speech was published in advance in all German newspapers on August 18, 1934. Max Domarus points out in his comment that Reich President Hindenburg neither had the right to appoint a successor, nor did he do so in his will. On the contrary, the Hitler government had already decided on August 1, 1934 for the “time of the death of Reich President von Hindenburg” to transfer “the previous powers of the Reich President to the Führer and Reich Chancellor Adolf Hitler”. On the anniversary of the death of Reich President Paul von Hindenburg, Reichswehr Minister Werner von Blomberg had the Reichswehr sworn in on the "Leader of the German Reich and People Adolf Hitler". The most important state offices were thus united in one person: Hitler was " Führer and Reich Chancellor".

After his brief retirement from military service, he retired to the Neudeck family estate at the end of 1934 . After the end of the war he lived with his brother-in-law Christian von Pentz in Medingen in Lower Saxony .

In the Nuremberg trials , Oskar von Hindenburg appeared as a witness against Franz von Papen. In 1956 he received in a lawsuit against the Süddeutscher Verlag , which included the 1954 posthumously published book by Erwein von Aretin , Krone and Ketten. Memories of a Bavarian nobleman , the allegations raised could not prove that Hindenburg had illegally stolen funds from Osthilfe in 1930 .

Oskar von Hindenburg died of a heart attack on February 12, 1960 during a cure in Bad Harzburg and is buried in the Medinger Waldfriedhof. His wife Margarete was buried there, as was his sister Irmengard von Brockhusen, wife of Hans Joachim von Brockhusen .