Griesen is a district of the city of Oranienbaum-Wörlitz in the district of Wittenberg in Saxony-Anhalt .

Griesen is located south of the banks of the Elbe in the Middle Elbe Biosphere Reserve and borders directly on the south of the city of Wörlitz . In the immediate vicinity is the Wörlitzer Park in the middle of the Dessau-Wörlitz Garden Realm , which was founded in the second half of the 18th century under the reign of Prince Leopold III. Friedrich Franz von Anhalt-Dessau was created. The area around Griesen is flat and is crossed by numerous ditches and streams. 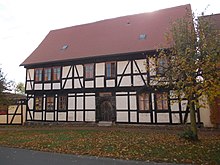 War memorial of the municipality of Griesen

Drehberg is located directly on the L133 state road between Griesen and Vockerode . It was originally used as an escape route from floods.

Münsterberg is located between Griesen and Vockerode approx. 1 km from the L133 state road.

Griesen is crossed by the L 133 from Oranienbaum via Vockerode to Dessau-Roßlau (formerly part of the federal highway 107) and is located on the district road K 2 376 (formerly B 107) to Wörlitz. The motorway connection of the ( A 9 ) Vockerode is 7 km away.

The next train stations are in Dessau-Roßlau or in Coswig (Anhalt) . The Wörlitz train station of the Dessau-Wörlitzer Railway is only 1 km away and is only served in the summer season.

Districts of the city of Oranienbaum-Wörlitz