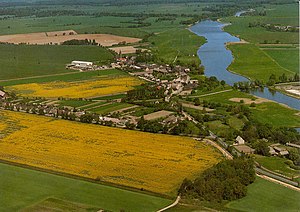 Riesigk is a district of the city of Oranienbaum-Wörlitz in the district of Wittenberg in Saxony-Anhalt .

Riesigk is located around four kilometers south of the banks of the Elbe, mainly in the Middle Elbe Biosphere Reserve between Dessau-Roßlau and Wittenberg . Only three kilometers west of Riesigk is the Wörlitzer Park in the middle of the Dessau-Wörlitzer Garden Kingdom .

The land survey was carried out using a trigonometric point on the church tower . This was located on the parapet of the viewing platform at a height of around 30 m and was removed during the restoration work . A tower bolt is located above the foundation base of the church tower, facing the street .

The area around Riesigk is flat and is crossed by numerous oxbow lakes of the Elbe as well as ditches and streams. Remnants of sand dunes from the last Ice Age are the only elevations (only a little more than two meters high). The largest backwater is the several kilometers long Schönitzer See, located directly behind the old flood dike in Riesigk. The lake is divided several times by the Seedammbrücke (dam with bridge for the road to Schönitz) and the Neuen Wall (flood dike from Taubenhaus to Rehsen ).

The district Riesigk lies in the floodplain of the Elbe. The soils are of Holocene origin. Almost all types of soils can be found: from light sandy soils to heavy clay soils . The soil values ​​of the soils are therefore in a wide range from around 20 to 85.

The groundwater level is very high and also depends heavily on the backflow of the Elbe into the Schönitzer See. Sometimes only one meter below the surface of the earth. If the Elbe floods for a longer period of time or after heavy rainfall, you can see the historical course ( meander ) of the Elbe on the fields and meadows that are then flooded . The groundwater flow direction runs from south-east to north-west.

In parts of the district, river sand and gravel occur as deposits from the former Elbe valley.

Lignite deposits were discovered during prospecting work in the 1970s under the entire municipality (continuation of the seam already mined in Bergwitz to the west). The thickness of 0.5–1.5 m with about 30 m of overburden is rather small.

Due to its geographical location, Riesigk has always had to deal with floods in the Elbe. Buildings to protect against floods have therefore been in place for centuries.

One of the most devastating floods to date reached Riesigk in August 2002 . Schönitz was flooded for several weeks.

The rain shadow of the resin caused in the area a slightly decreased rainfall of about 550 mm rainfall year. The rainiest months are June and August with around 60 mm of precipitation each. Snow is very rare in the winters . The mean annual temperature is around 9 ° C. The warmest month is July. The mean temperature this month is around 18 ° C.

In Rotehof, the farm workers' houses were numbered from 1 to 17. The houses of the estate and the houses 20 (former Gasthof Rotes Haus ), as well as 24 and 25 (previously Riesigk 30 and 29) got their current house number only after 1950.

House numbers 1–8 were assigned to Schönitz. The numbering took place after the reintegration into the city of Oranienbaum-Wörlitz in 2011.

The largest part of the district Riesigk consists of agricultural land . There is almost no forest in the immediate municipality area, but there are large contiguous alluvial forest areas and meadows up to the Elbe in the north , while in the east the first foothills of the Düben Heath can already be seen .

Deer and wild boar are represented as larger wild animals . Beavers have been native to this area for a long time. There are numerous species of waterfowl by and on the lakes and ponds . The fish population was severely decimated during the floods in 2002 and renewed through the replacement of different fish species.

The water nut was resettled in the Schönitzer See.

Before human settlement, in the last millennia after the Ice Age the Elbe lowlands between Fläming and Dübener Heide formed a wide swamp area with dense beech forests , puddles of water, marshes and Elbarmen.

These areas of the Elbe lowlands were opened up by man through building dykes , digging ditches, clearing and pushing the forest back into the current cultural landscape.

Riswig is the first recorded name for the community. The place apparently existed before the Slavic colonization of the area. The name was made up of the Old High German words ris = swamp, damp place in the forest and wi (c) h = village.

Slavic settlements probably existed here before the 10th century . Around 1200 there was the first mention of old - and new - Riswig . Riesigk was donated to the parish of Wörlitz in 1337 . In 1603, the area passed to the Principality of Anhalt-Dessau . In 1735 extensive dyke construction was carried out because the community is located in the floodplain of the Elbe. The first wooden church was built in 1745, but a few years later it was demolished due to disrepair. The bell was lt. Inscription in the workshop of master Martin Heintze in Leipzig poured. Georg Christoph Hesekiel (1732–1818) built a new church in the neo-Gothic style between 1797 and 1800 directly at the entrance to the village in the direction of Wörlitz. The bell from the previous church will be reused. The progress of construction can be seen on special after-work bricks with the year stamped on them.

The entrance to the town is characterized by the neo-Gothic church that was consecrated in 1800 and is located directly on the street. In the church there is a crypt in which the bones of Agnes von Loën , the sister of Prince Leopold III, rest . Friedrich Franz von Anhalt-Dessau (1740–1817). The Kirchgarten is laid out as a meadow orchard , because here, too, the following applies : "Combine the beautiful with the useful" .

To the north, the place is bounded by the old flood dike , which protected the place from the floods of the Elbe . The original dyke line has changed due to many dyke breakthroughs in the past centuries. A chain of ponds ( Grasloch, Schmidt's pond, the former village pond, Nickel's pond, Spanier Kolk, pond at the pilgrimage passage ) was created at the rinsed areas. The dikes were then led around these ponds. Immediately behind the flood dike is the "Schönitzer See", a several kilometers long former Elbarm ( nature reserve ).

The municipality's cemetery is located far outside the village on a sand dune from the last Ice Age , safe from the floods of the Elbe, which in historical times flooded the entire area as far as Oranienbaum . Parts of the sand dune were dismantled as building sand a long time ago, so that there is now a depression next to the elevated cemetery.

Czeynitz, the original name of Schönitz, is like most place names in the area of ​​Slavic origin. In 1952 Schönitz and Rotehof were incorporated into Riesigk. 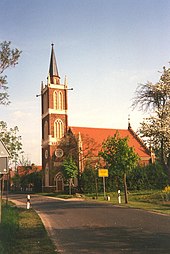 Most of the population is not affiliated with any denomination.

The majority of the church members belong to the Evangelical Lutheran congregation. The parish includes Riesigk and the neighboring parish of Gohrau , which has no church itself. In 1962 a second bell was cast again for the church tower . Between 1998 and 2000 the church was extensively restored using monument protection funds . The roof, tower, facade and windows were largely restored to the original. In 1532 Martin Luther preached in Wörlitz and probably also passed Riesigk on the way from nearby Wittenberg . In the church, on the side behind the altar , there were two memorial plaques for the sisters Casimire and Leopoldine of Prince Leopold III. Friedrich Franz von Anhalt-Dessau attached. These were originally located in the facilities on the Drehberg between Griesen and Vockerode . The church has a Röver organ from 1894 (as a replacement for a Zuberbier organ from 1801). This was renovated until 2017. It is almost in its original condition.

The parish is part of the parish Wörlitz with the parishes Vockerode, Wörlitz / Griese, Riesigk / Gohrau and Rehsen. Before the reorganization in 1992, the parish had belonged to the parish of Horstdorf as a branch since 1753 . That is why there is no rectory in Riesigk .

The last mayor of Riesigk was Silvia Grune, who held the office from 1979 until the municipalities were legally reorganized on January 1, 2011.

Anhalt dialect is spoken in Riesigk . The language border to the north is the Elbe (ick-ich line). Here are mark-Brandenburg dialects spoken.

The Elbe cycle path on Neuer Wall leads through the Elbe on the northern edge of the municipality.

The Dessau-Wörlitz Garden Realm , in whose eastern area Riesigk is located, was designed more than 200 years ago in a particularly eye-catching and conscious manner. Remnants of the avenues , which were formerly lined with fruit trees, can still be seen and are being redesigned as the German Avenue Road . Flood protection structures are everywhere on the old flood dams , but are now mostly used for other purposes.

Riesigk is located on the state road L131 from Dessau-Roßlau via Oranienbaum to Wittenberg and on the district road K 2 042 to Wörlitz . The federal highway 107 in Oranienbaum, which connects Graefenhainichen and Coswig , is approx. 7 km.

The motorway connection ( A 9 ) Vockerode is approx. 11 km away.

The nearest train station is in the municipality of Kemberg-Bergwitz on the Berlin – Halle railway line between Wittenberg and Bitterfeld . The Wörlitz station of the Dessau-Wörlitzer Railway is only served in the summer season. The Riesigk stop (kilometer 21.8) and the Gohrau / Rehsen station in Gohrau were created in 1934 when the Dessau-Wörlitz railway line was expanded from Wörlitz to Gohrau. At the breakpoint, a base for the agricultural trade cooperative (BHG) was established to supply the agricultural sector . Passenger traffic ceased in 1968. The section was dismantled in the 1970s and the BHG buildings were demolished. The line to Wörlitz went back into operation in 1982.

Until 1990 there was an agricultural airfield just north of the former railway station . Here it was still possible to take part in sightseeing flights over the Elbe in spring 1990.

Hugek and the surrounding area are ideal for exploring with bicycles with no noticeable differences in altitude. There are no developed bike paths on the streets .

From 1923 onwards, electrical energy was supplied via a medium-voltage line that was later connected directly to the Vockerode power station . It was not until 1940 that the Schönitz district was connected. Some private photovoltaic systems are now also feeding into the local network.

The water supply and wastewater treatment are carried out by the Oranienbaum Water Association .

Two gas pipelines cross the municipality in the east. The community itself is not connected to the gas supply.

A cable network for television reception does not exist. As a rule, households receive television programs via satellite and radio programs via antenna . The transmitters are located near Wittenberg on the Gallunberg. The majority of households buy the Mitteldeutsche Zeitung (regional edition of Graefenhainichen or Dessau ) as the daily newspaper . The free advertising papers Wochenspiegel and Super Sonntag appear weekly. The current telephone infrastructure was created in 1995. All households were connected via underground cables . It was not until the mid-1970s that the existing overhead lines with 15 telephone line pairs (for Riesigk, Gohrau and Rehsen) were replaced by underground cables from Wörlitz to Riesigk and subsequent free-hanging cables.

The numbers indicate the total number of inhabitants of the three districts:

from 1990 State Statistical Office, status as of December 31

Districts of the city of Oranienbaum-Wörlitz