This article describes the district Bergwitz of the city of Kemberg, for the physicist see under Karl Bergwitz .

Bergwitz is a district of the city of Kemberg in the district of Wittenberg in Saxony-Anhalt . The village is known regionally for the Bergwitzsee as a tourist recreational area.

Bergwitz lies on the edge of the Elbe glacial valley in the Düben Heath . Located on a sand ridge, the village is surrounded in the north by Auelehm and in the south by Bergwitzsee , a former swamp and peat area. The Bergwitzsee was created from a former lignite mine. The Wittenberg is from here 15 kilometers away, as far as Leipzig is 60 kilometers.

The Bergwitz area was settled around 3000 years ago in the Bronze Age. Since 1930, a large number of Bronze Age finds and a fire site with many vessels have been secured. The last finds were made in 1988.

During the second Slavic settlement period around 600 AD, the settlement "Birkosov" was founded. Around 1170 AD, Frisian colonists settled here and brought the field name "Hoppstall" with them. In 1201 Bergwitz fell to the Pratau provost .

By 1555 the place name changed via Berkgzow to today's Bergwitz.

The place belonged to the Wittenberg district until 1952 , which existed in Prussia , the Soviet occupation zone and the GDR from 1815 to 1952. 1952–1990 Bergwitz was part of the Graefenhainichen district in the Halle district . Since 1994 the place belongs again to the district of Wittenberg . 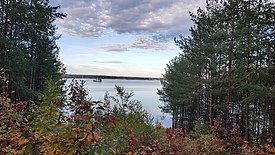 In open pit mines joke was 1908-1955 lignite mined. The 180 hectare Bergwitzsee , which is characterized by high water quality, with a local recreation area was created from the coal mine . The place has a nationally known campsite and numerous cycle paths between Elbaue and Dübener Heide.

The Bundesstraße 100 runs through Bergwitz between Eutzsch and Graefenhainichen and on to Halle (Saale) . The Bergwitz stop is on the Berlin – Halle railway line and is served every hour by the S2 and S8 lines of the DB Regio Südost . Bergwitz has been integrated into the Central German Transport Association since December 15, 2019 . From 1903 to 1951 the Bergwitz – Kemberg railway line began in Bergwitz .

Bergwitz has a day-care center and a primary school.

Districts of the city of Kemberg