Large snapdragon ( Antirrhinum majus ) or Garden snapdragon is a plant that the family of plantain plants belongs (Plantaginaceae).

Illustration with inflorescence, structure of the flower, leaves and fruit

The snapdragon is a perennial herbaceous plant that reaches heights of 20 to 120 centimeters. However, the varieties are mostly grown as annual plants . The above glandular stem is cylindrical, sometimes woody to the middle. The opposite leaves are simple, elliptical or ovate to broadly lanceolate, sometimes linear and usually bare. Stipules are missing.

Usually 8 to 30 short-stalked flowers stand together in one inflorescence ; the inflorescence axis is hairy glandular. The hermaphrodite flower is zygomorphic . The calyx lobes are egg-shaped. The crown is 25 to 45 (rarely up to 70) millimeters long and of different colors (red, pink, orange, yellow, white). The “throat” of the crown is closed by the protuberance of the lower lip, which is called “masked”, and the base is everted like a sack. The lower lip bulge usually has a yellow mark. There is a circle with four stamens . The ovary is on top. The flowering period extends from June to September.

The large, glandular capsule fruit releases the seeds through pore openings and extends far beyond the calyx when ripe.

The distribution area of ​​the wild forms of the snapdragon is the Mediterranean area from Morocco and Portugal to France and to Turkey and Syria . They often grow in crevices and walls. The snapdragon is a species of the Centrantho-Parietarion association. The numerous cultivated forms are grown worldwide in the temperate zones . They tend to run wild. 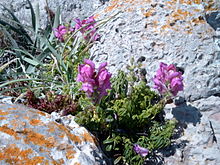 The following subspecies are known:

Variety of the garden snapdragon

The snapdragon is widely used as an ornamental plant in borders and as a cut flower. It is usually cultivated as an annual. The species has been in culture since the 15th century. There are numerous varieties in different groups of varieties.

The scientific name comes from the Greek αντί = "equal", "like" and ῥίς, -ινοϛ = "nose". Majus is Latin and means “greater” but also “May”, whereby it should be noted that the month of May got its name from the Roman growth god Majus. Linnaeus , who gave the plant the addition majus, clearly thought of the meaning of majus as larger and not of May and thus raised the snapdragon against the small toadflax ( Chaenorhinum minus (L.) Lange , syn .: Antirhinum minus L . ), which today still has the term minus in the meaning of smaller.

In the garden snapdragon there is an intermediate inheritance of the flower colors through incomplete dominance (see Mendel's rules ). The genus Antirrhinum is used in molecular genetic research as a model organism for the study of inheritance mechanisms and development. Antirrhinum majus is suitable for this due to its properties as a diploid plant, easy to cultivate with generation intervals of only four months, self-pollination and cross-pollination as well as its variation in morphology and flower color.

Antirrhinum majus has also been used to study the relationship between pollinators and plants, discussing the evolutionary advantages of the conical-papillary shape of the petals. There is evidence that the shape intensifies the color of the flowers, which helps orient the pollinators through sight or touch. This model plant has the advantage that a mutation at the MIXTA locus has been identified that prevents the formation of this conical petal shape. This made it possible to study pollinators with and without conical petals and to compare light absorption between these two groups. Since the MIXTA gene is necessary for the formation of conical cells, the use of the gene in the cultivation of antirrhinum was crucial and allowed experiments to be carried out to show why many plants produce conical-papillary epidermal cells.

Flower scents were also analyzed. Two A. majus enzymes, phenylpropanoids and isoprenoids, appear to play a role in the formation of the floral fragrances and in attracting pollinators.