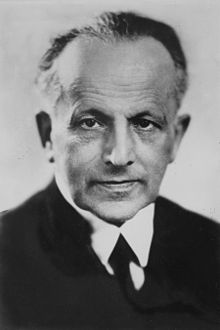 Hans Philipp Ehrenberg (born June 4, 1883 in Altona ; † March 31, 1958 in Heidelberg ) was a German Protestant theologian . He was one of the founding members of the Confessing Church and had to emigrate to England because of his Jewish descent and because of conflicts with the National Socialists . 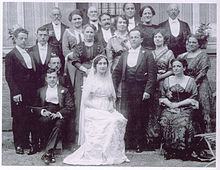 Hans and Else Ehrenberg married in 1913.

Hans Ehrenberg grew up in a family of emancipated Judaism . From 1898 to 1900 he attended the Christianeum in Altona. After graduating from the Wilhelm-Gymnasium in Hamburg in 1902, he studied law and political science in Göttingen, Berlin, Heidelberg and Munich. In his dissertation in 1906 on the situation of the ironworkers in the Ruhr area, his turn to the workers became clear. After his one-year military service in 1906/07, he began studying philosophy in the 1907/08 winter semester, initially in Berlin and from the 1908 summer semester in Heidelberg, which he completed in 1909 with a second (philosophical) doctorate from Kant's mathematical principles of pure natural science and the habilitation critique graduated in psychology as a science in 1910. In 1910 he became a private lecturer in philosophy in Heidelberg. In 1909 Ehrenberg was baptized as a Protestant in Berlin. During this time he became close friends with his cousin, the philosopher Franz Rosenzweig , who encouraged him to walk. In 1913 he married the teacher Else Anna Zimmermann (1890–1970).

During the First World War , Ehrenberg was a deputy officer, and from the end of 1914 a lieutenant. He was awarded the Iron Cross 2nd Class and the Baden Order of the Zähringer Lion 2nd Class. He initially saw the war as a legitimate defensive war. After the war, this view changed radically. He spoke of the crimes of war and German guilt. In 1918 he joined the SPD , for which he was an SPD city councilor in Heidelberg for 1 1/2 years from 1919, and was a member of a workers 'and soldiers' council. In the same year he received an extraordinary professorship in Heidelberg. During this time he wanted to become a pastor. He also worked with the Religious Socialists .

In 1922 Ehrenberg began studying theology in Münster, which he completed in 1924 with the second theological exam. He gave up his promising academic career and in 1925 became pastor at the Christ Church in Bochum in a community in the Church of the Old Prussian Union that was dominated by workers . He was involved in the “Kampfbund Christian Arbeiter”, but resigned from the SPD because he considered partisan work to be incompatible with his pastoral duties. As early as 1927, Ehrenberg's lectures on "Church and Anti-Semitism " led to tumults organized by the SA .

After the " seizure of power " by the National Socialists , Ehrenberg was one of the founders of the Confessing Church. As early as May 1933, he and four other Westphalian pastors formulated the “Bochum Confession”, the first of its kind, which contained a rejection of National Socialist ideology and a commitment to the Jewish roots of Christianity. In July 1933 he self-published 72 guiding principles on the Jewish-Christian question , in which he took a very clear position against anti-Semitism and also called for this from the Evangelical Church. In response to increasing pressure from both the NSDAP and the German-Christian church authorities, he himself applied for his retirement in 1937 after the Westphalian Council of Brothers of the Confessing Church had advised him to do so. Ehrenberg continued to work for the Confessing Church, whose pastors in Bochum publicly showed solidarity with him.

In September 1938 he was given a “total ban on preaching and speaking ”. His apartment was devastated during the November pogroms in 1938. A few days later he was sent to the Sachsenhausen concentration camp . In 1939, thanks to the intervention and surety of the Bishop of Chichester, George Bell , he was able to emigrate to England, where his family followed him a short time later. Here ecumenism , a future unity of the churches, became increasingly important for him .

After the Second World War , Ehrenberg returned to Germany in 1947, where he initially worked as a pastor for adult education in Bethel. After retiring, he moved back to Heidelberg in 1953, where he died in 1958.

Hans Ehrenberg was one of the few German Protestant theologians, including within the Confessing Church, who clearly and publicly opposed the anti-Semitism of the National Socialists and stood up for Jews. He also vehemently demanded this from his church. He also criticized Christian anti-Judaism and emphasized the similarities between Judaism and Christianity.

In addition, his special focus on the problems of workers lifts him out of the church of his time. In addition to his practical theological work, Ehrenberg wrote a large number of philosophical and theological articles and essays throughout his life.

In his honor and in memory of him, the high school in Bielefeld - Sennestadt was named in 1963 , which is sponsored by the Evangelical Church of Westphalia.

The estate of Hans Ehrenberg is in the Bielefeld State Church Archive .

On November 11, 2019, a stumbling block was laid for Ehrenberg in Bochum , with which survivors have also been honored for some time. At the same time, his friend Albert Schmidt received a stumbling block.

The Evangelical Church District Bochum, in coordination with the Hans Ehrenberg Society, has been awarding the Hans Ehrenberg Prize, endowed with 5000 euros , in the Christ Church in Bochum every two years since 2000 to people “who represent genuinely Protestant profiles in public debate and - in current socio-political Discourses in interdisciplinary science and in the area of ​​church activity - making them present ”.