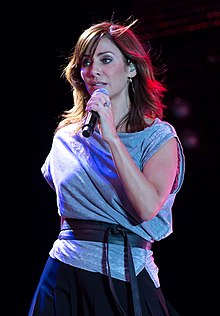 Natalie Jane Imbruglia (born February 4, 1975 in Sydney , New South Wales ) is an Australian - British singer and songwriter , actress and model . Imbruglia became internationally known with the song Torn , released in autumn 1997, and the accompanying album Left of the Middle .

Imbruglia grew up in the small, coastal town of Berkeley Vale (north of Sydney) in the Australian state of New South Wales . Her father, Elliot Imbruglia, is an Italian immigrant from the island of Lipari , and her mother, Maxene Anderson, is a native of Australia. Natalie is the second oldest of four sisters; her younger sister Laura is also a singer.

As before Kylie Minogue and Jason Donovan , Imbruglia first played a role in the Australian soap opera Neighbors from 1991 .

Inspired by her success in that series, Imbruglia started a career as a singer in 1997. Her first single Torn , a cover version of the song Brændt by her Danish singing colleague Lis Sørensen , reached number two on the UK single charts in November 1997. Her debut album Left of the Middle sold over a million copies in the UK alone and included two other top ten hits with Big Mistake and Smoke (both 1998). In 2001 the follow-up album White Lilies Island was released , which, despite radio-friendly singles such as That Day (2001), Wrong Impression (2002) and Beauty on the Fire (2002), fell short of the sales figures of the successful debut.

Imbruglia in 2002 established her acting career continued, playing alongside Rowan Atkinson in the British spy - spoof Johnny English (2003). She also worked as a model for the French cosmetics manufacturer L'Oréal .

With the single Shiver , released in March 2005 , Imbruglia was able to post another top ten success in the British charts. Her third album, Counting Down the Days , released in April, made it to number one on the British album charts. In September 2007, the greatest hits album Glorious: The Singles 97-07 was released, including five new songs. The first single from it was the newly recorded Glorious , which was released in August 2007 in Australia and in September in Germany . In October 2009 she released her fourth studio album Come to Life , on which the single Want can be found.

In 2014 Imbruglia signed with Sony Masterworks, where she released her first studio album in five years. The album, titled times , only contains cover songs by male performers. The first single, Instant Crush , is originally from Daft Punk feat. Julian Casablancas and was published in July 2015.

On New Year's Eve 2003, Imbruglia married her compatriot Daniel Johns , the lead singer of the bands Silverchair and The Dissociatives , with whom she had been in a relationship for three years. In January 2008, they announced their divorce.

On October 9, 2019, she announced the birth of her son on her Instagram channel. 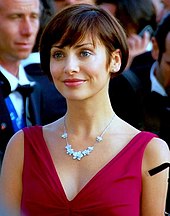