The scrotum or scrotum is one of the male genital organs and is a skin and muscle sac in mammals that contains the testicles , epididymis , the beginning of the spermatic duct and the end of the spermatic cord . It's located between the legs , penis and perineum . In humans , pubic hair is naturally grown on the scrotum from puberty onwards .

Scrotum and testes in humans

The scrotum encloses the testicles and the epididymis as well as the draining spermatic cords . It is a multi-layered skin pouch that is divided into two halves by a partition (septum scroti), which in clinical usage are also referred to as scrotal fans . This dichotomy can be recognized from the outside by a kind of "seam" ( Raphe scroti ). The mostly darkly pigmented skin is hairy ( pubic hair ) and contains sweat and sebum glands as well as nerve endings that make it sensitive to touch ( erogenous zone ). The subcutis consists of a network of smooth muscles and elastic fibers , which is why it is referred to as "flesh skin " ( tunica dartos ).

Cross section through the process of the vaginal membrane

Inside the scrotum, the testicles and epididymis sit in a testicular cavity (cavitas scroti). The testicular cavity is formed by a protrusion of the peritoneum and the inner trunk fascia (here called Fascia spermatica interna ), the processus vaginalis . The process of the vagina is one of the testicular sheaths inside the scrotum. The peritoneum part of this protuberance is called the vaginal skin ( tunica vaginalis testis ). It lines the inside of the scrotum (so-called wall sheet, lamina parietalis or periorchium ), then turns inside out as a double lamella and covers the testes as a visceral lamina ( lamina visceralis or epiorchium ). There is a very narrow space between the two leaves, the cavum vaginale , which ensures that the testicle can move in the scrotum. The intestinal leaf forms a groove (bursa testicularis) between the testes and the epididymis. The connection point between the two leaves is the testicle- cochineal ( mesorchium ), which is used to fix the testicle in the scrotum. In addition, a band-like remnant of the peritoneum can indicate the connection to the abdominal cavity. The testicle is also provided with a short strip connected to the epididymis (testis own band, ligament testis proprium ). This continues from the epididymal tail as a ligamentum caudae epididymidis and additionally attaches the testicles indirectly to the floor of the scrotum.

The testicle lifter muscle ( cremaster muscle ) attaches to the process of the vagina. As a protective device, it can pull the testicles closer to the abdominal wall when it is touched or cold. It consists of muscle fibers that branch off from the musculus obliquus internus abdominis and the musculus transversus abdominis , two muscles of the lower abdomen . They accompany the spermatic cord and attach to the fascia surrounding the testes ( Fascia spermatica interna ). The cremaster is innervated by the genital branch of the genitofemoral nerve . In rodents and mammals with seasonal testicular descent, rarely also in individual individuals of other mammals, the muscle can completely retract the testicle into the abdominal cavity (" pendulum testicle "). With strong sexual arousal, the testicles are also strongly drawn towards the body. This shows an approaching orgasm . 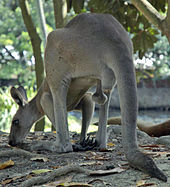 Male kangaroo with a pronounced scrotum

A scrotum is in most marsupials and higher mammals with the exception of those without testicular descent ( Testiconda formed), while the testes in all other vertebrate animals , including monotremes remain in the body cavity. A distinction can be made between a sedentary scrotum, in which the testicles are located in a layer of connective tissue under the skin, and a hanging scrotum, in which a real pouch is formed that hangs between the thighs. A sedentary scrotum is formed in pigs and hippos , while most other mammals, including primates, have a pendulous scrotum.

In the case of marsupials, it is discussed whether the pouch is a homologous structure to the scrotum and the greater labia of female mammals, as all these structures develop in the area of ​​the genital bulges . This is reinforced by the existence of a rudimentary pouch in male marsupials in front of the scrotum, which at most, however, is based on partial homology. A separation into bag and scrotum tissue occurs during development before the hormonal influence and is directly genetically influenced - if only one X chromosome is present, a scrotum is formed; if there are two X chromosomes, a pouch is formed.

The function of the scrotum has not yet been conclusively clarified. The most common hypothesis assumes that the descent of the testicles and their displacement into the scrotum serves to protect the sperm from excessively high temperatures in the body cavity.

The testicles in the scrotum are kept two to five degrees Celsius cooler than the rest of the inside of the body. This temperature is optimal for the production of sperm as well as for the survival of already produced male semen. The testes temperature is controlled in the scrotum in that cold contracts, the radiating surface for the body heat thereby reducing, and in heat relaxed, whereby the emitting surface increases. Other mechanisms play a role in regulating temperature within the scrotum: the cremaster muscle can pull the testicles closer to the body, and the testicular artery and vein form a network that functions as a heat exchanger.

The scrotum is formed in the embryonic development from the genital bulges, whereby the large labia (labia majora) of women correspond to it in the female sex . In the male embryo, the genital bulges merge to form the scrotum, the merging line being retained as the scrotal septum and visible from the outside as raphe scroti .

At the end of embryonic development, the testes are moved into the scrotum during the descent testis ("testicular descent"), guided by the lower gonadal ligament (gubernaculum testis). The testicles should be in the outer inguinal ring at the beginning of the 8th month of pregnancy and the descent should be completed by the beginning of the ninth month of pregnancy at the latest, this is considered a sign of maturity of the male newborn . When the testes descend, the wall of the testicular cavity ( cavum scroti ) is formed by the accompanying protuberance ( processus vaginalis ) of the peritoneum . The connection to the abdominal cavity, which initially exists via the inguinal canal , is usually obliterated in order to prevent the development of a scrotal hernia on the one hand and the testicle from re-entering the inguinal canal on the other.

Malformations are treated through surgical interventions such as removing tissue or relocating ectopic tissue.

Distinct varicocele on the left.

As a skin and muscle sac, the scrotum itself is only affected by very few diseases. Like other tissues, it can show inflammation and other skin-specific diseases. Varicose vein-like enlargements of the accompanying venous vessels, especially in the left scrotal compartment, are especially visible as varicoceles when standing . In obese men one can Intertrigo spread to the scrotum. Abscesses of the skin can manifest as scrotal abscesses, especially in predisposed people .

The testicular (sac) hernia ( scrotal hernia or scrotal hernia) is a particularly severe special form of the inguinal hernia in which the solid outer covering of the scrotum breaks and parts of the intestines (loops of the small intestine) can collapse into the scrotum. A scrotal hernia can be congenital or acquired. The accumulation of fluid in the scrotum cavity leads to a water breakage ( hydrocele testis ), which can also be either congenital or acquired. This is a pathological effusion of serous fluid and an accumulation in the testicular cover or in the spermatic cord ( hydrocele funiculi spermatici ). The result is a strong increase in the space between the testicular sheaths.

See also : "Cultural and historical significance" in the article testicles

Use of animal scrotum bags

Bags are sometimes made from the scrotum of animals ( e.g. billy goats ) , for example as a drinking bottle or wallet. The term Bocksbeutel is probably derived from this. But there are other hypotheses about the etymology of this word.

The scrotum in art and culture

In Japanese mythology , tanuki , demons ( yōkai ) similar to the raccoon dog , are often represented as a symbol of luck with oversized testicles. The coat of arms of the Italian noble house Colleoni from Bergamo shows several pairs of testicles and is probably an allusion to coglione , an Italian name for testicles.