Hundelshausen is a district of the city of Witzenhausen in the Werra-Meißner district of Hesse ( Germany ). The village has almost 1,100 inhabitants.

The von Hundelshausen family belongs to the Althessian knighthood that still exists today .

Hundelshausen is located on the eastern edge of the Kaufunger Wald in the geo-nature park Frau-Holle-Land (Werratal.Meißner.Kaufunger Wald) , 5.5 km south of the core town of Witzenhausen and 3 km north-northeast of Trubenhausen, which belongs to Großalmerode . It is located northeast of the Langenberg ( 565  m above sea  level ) at about 200  m altitude in the valley of the lower reaches of the Gelster and on the federal road 451 . The Rückerode estate , located 1.3 km northeast of the village, is an exclave in the Hundelshausen district .

In the 19th century, gypsum was discovered on the eastern edge of the village . Since 1921 the gypsum has been mined by the Kurhessische Gipswerke Peter Orth, which, after the merger with the United Gipswerke Stadtoldendorf in 2004, is the largest local employer under the name VG-Orth GmbH & Co. KG. The green lake , a natural swimming lake , was created through the gypsum mining .

View from the top to the southeast of Hundelshausen (summer 1957)

On October 1, 1971 Hundelshausen was incorporated into the city of Witzenhausen, because Hundelshausen, Kleinalmerode, Ellingerode, Dohrenbach and Roßbach could not agree in which village the town hall of their jointly planned "municipality of Vierbach" should be.

In 2011 the 900 year celebration took place: In addition to the fair, a Festkommers was held on Thursday evening. Several thousand visitors came to Hundelshausen for the historic pageant on Sunday. The 900 year celebration was held by the "900 years Hundelshausen GbR", whose shareholders are the five associations leading the fair and the Gelstertal cultural association. In 2011 the GbR organized numerous other events on the occasion of the village anniversary, such as B. an anniversary shooting, and she took part in numerous parades in the region. For this purpose the GbR u. a. an honorary award from the Witzenhausen harvest festival committee. 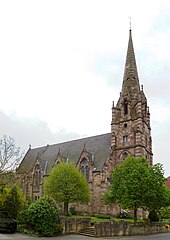