Dohrenbach is a district of Witzenhausen in the Werra-Meißner district in North Hesse . It is a climatic health resort .

Dohrenbach is located in the Kaufunger Wald and in the geo-nature park Frau-Holle-Land (Werratal.Meißner.Kaufunger Wald) 3.8 km south-south-west of the core town of Witzenhausen on the north-west bank of the 1.2 km east-north-east of the village, which flows into the Gelster River Dohrenbach . The state road  3389 runs through the village from Roßbach in the west to federal road 451 in the east.

In the district of Dohrenbach, about 1.5 km south of the village, at the end of district road 64, is the Fahrenbach farm group , a former manor in the Fahrenbach valley . About 3.5 km southwest of Dohrenbach is the Rote See  - relic of the basalt mining at Hessenbühl, which was discontinued in 1914 and has been designated as a natural monument . 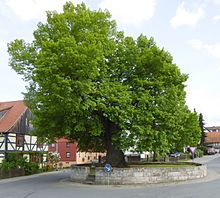 Court of Justice in Dohrenbach

The village "Durebach" was first mentioned in 1199. In later documents the place name appeared as Thorinbach (around 1354), Dorinbach (1370), Dornbach (1397), Dorenbach (1437) and Torinbach (1437). In the 15th and 16th centuries, the small town obviously had an eventful fate. In 1466 the place was called desolate , and in 1497 the desolation was drawn into the district of Witzenhausen. In 1516 there was talk of a village again, and its field was again detached from the Witzenhausen district, and in 1529 15 adult male residents were mentioned. Already in 1536 the place had fallen desolate again (Dorrenbach, zue der Wustenunge). In 1551 there is again talk of a village, with only 19 inhabitants, but only a year later only a mill and a desert. Even in 1565 the place was still desolate, but in 1575 and 1585 there were 20 house seats in the place. The Thirty Years War brought the place to the brink of decline. In 1650 there were only six house seats in Dohrenbach, and in 1657 there are reports of 11 houses destroyed by the war.

Only then was the permanent repopulation possible. In 1681 there were already 17 house seats again, and in 1747 29 households ("teams") with 33 fireplaces were counted. In 1744, 155 inhabitants and 441 Kassel arable land are reported. This was followed by a steady and considerable increase in the resident population until the middle of the 19th century, when it reached an interim high of 464 inhabitants in 1852. A phase of emigration and emigration in the second half of the 19th century was followed by renewed population growth, which in the first few years after the Second World War saw a brief climax with the arrival of bombed out and displaced persons.

Since 1264, when Witzenhausen also came to Landgrave Heinrich I of Hesse , the village had belonged to the Landgrave of Hesse , with parts of the place and its area often being pledged or fiefdom owned by various noble families ( Berlepsch , Biela , Plesse , Hans von Stockhausen , Hans von Dörnberg the Younger ). The Mariengarten monastery , located between Witzenhausen and Göttingen, also owned the site from 1397 to 1421. From 1437 to 1824 the Barons von Berlepsch were owners of the landgrave or electoral castle fiefdom and the lower jurisdiction of Dohrenbach and thus de facto masters of the village. The church patronage in town was also hers.

On October 1, 1971, Dohrenbach was incorporated into the city of Witzenhausen.

Dohrenbach whose center the Linde square with two old gerichtslinde form and Built in 1853, the half-timbered church, is set since the 1950s much on tourism, especially hiking guests and has a number of accommodations from hotel to guest rooms and a hay hotel . There are Kneipp water treading pools on some hiking trails .

Until 1838 copper was mined at the so-called Pochhaus, about 1 km northeast of Dohrenbach on the west bank of the Gelster and at the influence of the Dohrenbach in this, east of the vineyard between railway and road or immediately south of today's company premises of SCA Packaging Containerboard Germany .