Hundshübel lies at an altitude of approx. 600 m on the north bank of the Eibenstock dam in the Ore Mountains on the B 169 . According to the natural space map of Saxony , the place is in the mesogeochore "plateaus near Schneeberg" and belongs to the microgeochore "felt pond plateau". 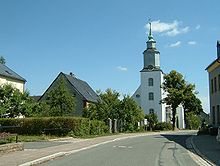 In 1533 Hundshübel - then called Hundesudell - was first mentioned in a document when the area was sold by the Tettau family to the Wettins . At the beginning of the settlement there were about ten farming families. Most of these came from Eibenstock and were therefore initially cared for by the church from there. In 1536 the number of farmers had risen to 15 and in 1563 to 22. After the reign of Schwarzenberg was taken over by Elector Johann Friedrich I of Saxony, the new Protestant doctrine, which was initially only slowly spread, spread quickly. August Schumann mentions the branches of business in the State Lexicon of Saxony in 1817:

“The inhabitants have some farming and cattle breeding, many of them live from lace making , mining, woodworking, and carting. Good wheelwright work is done there. Some top dealers and publishers refer to the trade fairs in Leipzig and Braunschweig . Good business is done here with all kinds of iron articles. "

In Hundshübel there is an Evangelical Lutheran parish which belongs to the Aue church district. From 1533 the place belonged to Eibenstock and from 1545 to 1769 to Bärenwalde . In 1770 Hundshübel got its own pastor. In 1784 the construction of a new church began. 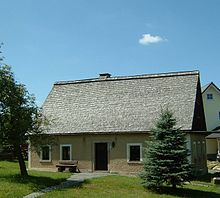 Until the re-routing of federal highway 169 in 2010, this road ran through the town. In order to prevent possible contamination of the Eibenstock dam in the area of ​​the pre- dam at Hundshübel, the old route was closed to traffic and the road was relocated towards Lichtenau. Since then, Hundshübel can no longer be reached directly from the direction of Schneeberg , which caused violent protests among the citizens.

There is a volunteer fire brigade in Hundshübel .

A nationally well-known company produces high-quality shaving brushes and other shaving accessories. It sees itself as “the world's leading supplier of high-quality accessories for wet shaving”, has a shop in Berlin and two shops in London .

The International Mountain Hiking Trail of Friendship Eisenach – Budapest leads through Hundshübel, coming from Kuhberg via Stützengrün and turning towards the valley of the Zwickauer Mulde.

Parts of the municipality of Stützengrün