Ian Curtis was born on July 15, 1956 in Old Trafford , Manchester , the son of a police officer and grew up in Macclesfield . He attended King's School, which he left after reaching O-Levels due to differences of opinion with his teachers. He experienced drugs in his early teens when he was taking large amounts of medication such as Valium . Even then, the first signs of his epilepsy appeared , which he assessed as a result of his drug abuse.

As a teenager, Curtis developed the idea of ​​dying before his thirtieth birthday. This was reinforced by role models such as Jim Morrison , who died at the age of 27 for reasons that are not clear, so that Curtis idealized his early death. However, his friends assumed his attitude would change and did not take them seriously. However, Curtis was the only one around him who injured himself under the influence of drugs. He directed the violence only against himself and never against others.

After breaking off his school career, Curtis first worked at Rare Records . He later left this post and worked in the civil service , the UK Department of Defense and the Manpower Services Commissions in Manchester, a type of employment agency from which he was transferred to the Macclesfield employment agency. In 1979, however, he had to give up the job due to excessive stress caused by the increasing success of Joy Division .

In June 1976 Curtis came across Peter Hook , Bernard Sumner and Terry Mason , with whom he formed a band. On May 19, 1977 they made their first appearance under the name Warsaw , which refers to the song "Warszawa" by the musician David Bowie , who is admired by Curtis . Their first EP An Ideal for Living released the band in January 1978 under the name Joy Division , since there was already a London band called Warsaw Pakt .

In December 1978, on his way back from a concert in London , Curtis had his first epileptic seizure. When the other band members took him to the hospital, the first suspicion arose that Curtis might be ill. This was confirmed after a visit by a specialist in January 1979. However, the doctors were never able to find a cause for his illness. The medication that Curtis then received produced strong mood swings, which were also reflected in the band's depressed and somber lyrics. However, those around him only considered his lyrics to be part of the band's music. But looking back, band member Bernard Sumner said, “I really think it was the pills that killed him. Really. I know it."

Curtis' daughter Natalie was born on April 16, 1979. About two months later, Joy Division's first album, Unknown Pleasures, was released . During this time Curtis' immediate environment first became aware of its text content and suspected that it was a public call for help. As Joy Division grew in popularity, so did its drug use. According to Deborah Curtis, he developed an “obsession with mental and physical suffering,” for example, he dealt with National Socialism in Germany. As the band's reputation grew, so did the distance between him and his wife.

When Joy Division appeared as the opening act for the Buzzcocks , Curtis had to give up his full-time job. This reduced his stress so that there was a noticeable improvement in his illness.

At the time, Curtis had admitted having affairs while on tour. For example, he met the Belgian journalist Annik Honoré , with whom he had a long relationship and who accompanied his tour. During the 1980 European tour, however, his wife Deborah discovered his stealth. At her request, he promised to end the extramarital relationship.

After this breakup, Curtis' epilepsy increased again. The singer also had epileptic seizures during some concerts. In the same year he attempted suicide , but it failed. He said he had graduated from the music industry and wanted to leave the band. Because of the incident, Joy Division wanted to take a break, but it did not materialize; rather, an America tour was planned. 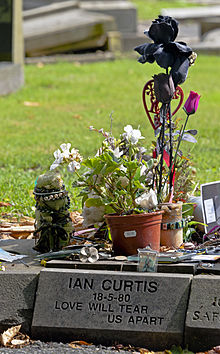 In the spring of 1980, Curtis' wife filed for divorce as the relationship had deteriorated further. Curtis tried unsuccessfully to persuade her to withdraw her application for divorce. As a result of his private problems, his fear of the American tour also increased. On the one hand he feared negative effects on his epilepsy, on the other hand he suffered from fear of flying.

Curtis finally hanged himself on the night of May 17-18, 1980 (the day before the tour began) in Macclesfield. His body was cremated and buried in Macclesfield Cemetery on May 23. His tombstone bears the inscription "Love Will Tear Us Apart", chosen by his wife, as a reference to the Joy Division song of the same name. The stone was stolen by strangers on the night of July 1st, 2008.

The remaining members of Joy Division formed in 1980 together with the musician Gillian Gilbert , the friend of the Joy Division drummer Stephen Morris, under the name New Order and initially made use of the compositions and texts of Ian Curtis.

Musically Curtis was influenced by David Bowie , Lou Reed , Iggy Pop and the singer and songwriter of his favorite band The Doors , Jim Morrison . His interest in literature was reflected in the names of the lyrics he wrote. For example “Interzone”, based on a short story collection of the same name by William S. Burroughs , or “Atrocity Exhibition”, a short story volume by JG Ballard .

One of his trademarks, besides his dance style, was Curtis' distinctive bass-baritone voice, which was in stark contrast to his gentle speaking voice and helped to shape the depressive character of the music, which made Joy Division unmistakable.

Health problems as a result of his epilepsy as well as increasing personal difficulties with his wife, Deborah, affect Curtis considerably. Probably the best known song by Joy Division, Love Will Tear Us Apart , describes his problem-laden situation in its text.