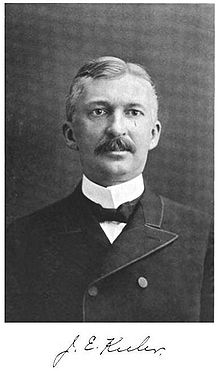 Between the ages of twelve and twenty, Keeler did not go to school, but continued to educate himself. Keeler studied from 1877 with the help of a benefactor at the Johns Hopkins University in Baltimore and graduated there in 1881. He became an assistant to Samuel Pierpoint Langley at the Alleghenny Observatory in Pennsylvania . Here he remained until 1886. He started working at the observatory with an expedition to the Rocky Mountains to the infrared radiation of the sun to measure.

Between 1883 and 1884 he stayed for further studies in Heidelberg and Berlin .

In 1886 Keeler went to the Lick Observatory on Mount Hamilton (which was not completed until 1888), where he had held the position of astronomer since 1888 . On June 1, 1891, he was appointed director of the Alleghenny Observatory and at the same time employed as a professor of astrophysics at the Western University of Pennsylvania . In 1898 he returned to the Lick Observatory as director.

His earliest work concerned the spectroscopic similarity between the stellar spectra and the Orion Nebula . In 1894 he succeeded in spectroscopic proof of the radial speed of planetary nebulae based on the red and blue shift. Its success is mainly due to its instrumentation; a grating spectroscope was available to him, which he combined with the 91 cm refractor of the Lick observatory. (see Gudrun Wolfschmidt , Milchstrasse, Nebel, Galaxien , 1995)

He also carried out planetary observations, e.g. B. that of Mars , although he could not confirm the observations of the so-called Mars channels that Schiaparelli believed he had found and which sparked so much speculation at the end of the 19th century. In 1895 he examined the rings of Saturn with the help of spectroscopic methods in order to determine their period of revolution . He found that the rings did not rotate uniformly and therefore could not be made of solid matter. He supported James Clerk Maxwell's assumption that the rings consisted of meteorites and dust. He was also the first to observe the Encke division of Saturn's rings in January 1888 .

In addition to his art of observation, Keeler was also able to construct and improve instruments. So he built an improved spectrograph that allowed the photographic recording of stellar spectral lines even with low brightness.

Keeler realized that most of the galaxies have a spiral shape.