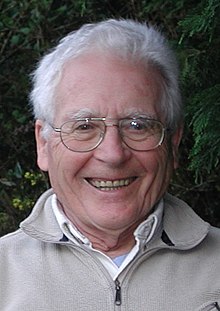 With the invention of the electron capture detector and his measurements of the spread of CFCs in the earth's atmosphere in 1971, he made an important contribution to saving the ozone layer . Lovelock became known to a wider public since the mid-1970s, together with Lynn Margulis, as the founder of the Gaia hypothesis on the physiology of the earth . As the author of numerous popular science books and articles on the subject of the environment and the future of mankind, he is considered an influential pioneer of the ecology movement .

Since 1974 he is a member of the Royal Society , since 1994 he has been Honorary Visiting Fellow at Green Templeton College of Oxford University .

Lovelock grew up in a Quaker community in his birthplace . When he was supposed to be called up for military service in World War II , he refused. However, after reading more information about the atrocities of the Nazi state , James Lovelock volunteered. However, the commission decided that his medical work was more important than an immediate frontline deployment. So he was able to stay in his home country and at the same time get another degree ( Bachelor ) in chemistry at the University of Manchester in 1941 . During a research assignment in 1942, which was supposed to clarify the temperatures at which cells of living beings are damaged, rabbits were originally available to him to be anesthetized . Out of respect for other people's life, however, he carried out his experiments on his own skin cells.

In 1948 he received his doctorate from the London School of Hygiene and Tropical Medicine as "Ph.D.". In 1954 he began a fellowship in medicine ( Rockefeller Traveling Fellowship ) at Harvard University Medical School in Boston and between 1954 and 1955 Rockefeller Traveling Fellowship in Medicine at Harvard University. In 1958 he was a visiting scientist at Yale University Medical School, USA. In 1959 he graduated from the University of London with a degree in biophysics .

From 1961 to 1964, James Lovelock was Professor of Chemistry at Baylor College of Medicine in Houston , Texas . At the same time he developed instruments for the analysis of extraterrestrial atmospheres on behalf of NASA . From 1964 he ran an independent scientific laboratory in the USA.

However, he continued his honorary academic work as visiting professor, first at the University of Houston, then at the University of Reading in the United Kingdom. From 1982 he was a board member of the Marine Biological Association at Plymouth and its president between 1986 and 1990.

In 2000, Lovelock published an autobiography.

In a report in the newspaper Die Welt from 2016 it was read that the then 97-year-old had hardly any health problems. It was said: "Old age doesn't seem to affect his body, he doesn't need a stick, he gets up nimbly from his armchair and at the weekend has only marched twelve kilometers out the coastal slopes."

James Lovelock is interested in the science of life, originally medicine, later the earth as a complete biological system. His areas of specialization are atmospheric chemistry , geophysiology and "Earth systems science". His second area of ​​interest is instrument development. Lovelock developed the electron capture detector (ECD), which is of great importance in environmental analysis . It was only with the ECD that it became possible to detect chlorinated environmental toxins such as CFCs, PCBs and chlorinated pesticides such as DDT even in small traces by gas chromatography .

The starting point for all of Lovelock's considerations and research is his thesis “the earth, including the atmosphere that surrounds it, is a living being”. From 2004, Lovelock intervened arguably in the current climate and future discussion. He believes that human-made climate change will make the earth largely uninhabitable in the near future. With his thesis that the massive use of nuclear power compared to the massive use of fossil fuels is the lesser evil, since this is the only way to mitigate the devastating effects of climate change, he offended many environmental activists. In the following years he set out his convictions in two books, first in Gaias Revenge (2006), later in Vanishing Face (2009), as well as in various newspaper articles, for example in The Independent from January 16, 2006. The name Gaia for the earth is borrowed from the Greek and goes back to an idea of ​​the Nobel laureate in literature William Golding , with whom Lovelock was friends.

There was extensive media coverage in the German press. One of the main points of criticism here was that Lovelock overestimated nuclear energy and underestimated renewable energies. His advocacy of atomic energy is based on the fact that he believes that only by using this possibility can CO 2 emissions be reduced quickly and sustainably. At the same time, he sees a first real possibility that mankind can protect itself from meteorite impacts: with missiles and nuclear warheads fired in good time.

James Lovelock has authored over 200 scientific publications in medicine, biology, instrument research and geophysiology and pending over 50 patents, mostly for detectors used in chemical analysis.