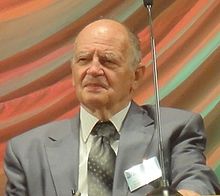 Awrorin graduated from the physical faculty of the University of Leningrad , as well as that of the Kharkov University and graduated in 1954 studying at the Physics Department of Lomonosov Moscow State University (MGU) from. He then worked in the secret design office KB-11, which later became the All-Russian Research Institute for Experimental Physics WNIIEF in the Closed City of Sarov . There he was involved in the development of the first Soviet two-stage hydrogen bomb .

In 1955 he moved to the recently founded All-Russian Research Institute for Technical Physics WNIITF in the Closed City of Sneschinsk . He used the results of the experiments carried out under his direction for his candidate dissertation , which he defended in 1961. His teachers were Yevgeny Ivanovich Sababachin and Boris Wassiljewitsch Litvinow . Then he worked on problems of the peaceful use of nuclear energy . In 1964 he became head of the theory department. 1968–1973 he was a member of the Snezhinsk City Soviet and 1973–1977 a member of the Soviet of Chelyabinsk Oblast . In 1974 he received his doctorate in physical-mathematical sciences . His scientific work has been the subject of scientific publications. In 1985 he became Scientific Director of the WNIITF. In addition, he headed the chair for highly concentrated energy at the Moscow Engineering Physics Institute (MIFI). In 1987 he became a Corresponding Member of the Academy of Sciences of the USSR (AN-SSSR, since 1991 Russian Academy of Sciences (RAN)) and in 1992 a full member of the RAN. He was a member of the Council for Science and Technology Policy of the President of the Russian Federation (1995–1997) and of the Council for Science, Technology and Education of the President of the Russian Federation (2001–2005). After his retirement in 2010, he was honorary scientific director of the WNIITF. He participated in the Pugwash Conferences on Science and World Affairs as a representative of the Russian Pugwash Committee at the RAN Presidium.

Avrorin died of cancer and was buried in the New Cemetery in Snezhinsk. The Prime Minister of the Russian Federation, Dmitry Anatolyevich Medvedev , expressed his condolences to family and friends.