Johann Fabricius (also Johannes Fabricius; born January 8, 1587 in Resterhafe (East Friesland), † January 10, 1617 in Dresden ) was a German astronomer . He discovered the sunspots independently of Galileo Galilei and others .

Johann Fabricius was the eldest son of eight children of the pastor and astronomer David Fabricius , who conducted extensive astronomical and meteorological research and was in correspondence with Tycho Brahe , Johannes Kepler and Simon Marius .

Little is known about Johann Fabricius' childhood and youth. At the age of twelve, Johann survived a plague that hit northern Germany as an epidemic in 1598 . Later, like his father, he attended the Latin school in Braunschweig . From there he often sent his father weather reports, which he recorded in his "Calendarium".

After finishing school, he began studying at the University of Helmstedt in May 1605 , where his father had already studied. In addition to the usual basic studies at the philosophical faculty, he dealt with medicine . However, as early as 1606 he moved to the University of Wittenberg , where he stayed for three years and studied grammar , dialectics and rhetoric as well as geometry , astronomy , chronology and physics . From Wittenberg he wrote a letter to Johannes Kepler in 1608. In addition to astronomy, like his father, he dealt with astrology and was convinced that it provided reliable knowledge. He also believed that he had found a method of weather forecasting. In 1609 Fabricius went to Leiden to study medicine at the university there. In the summer of 1611 he returned to Wittenberg and in September acquired the title of Magister in Philosophy. Almost nothing is known about his subsequent life. Obviously, he initially continued to study medicine. He died on a trip to Basel, where he wanted to obtain his medical doctor.

Discovery of the sunspots

During his time in Leiden, Fabricius acquired a telescope which he brought with him to his father's house in Osteel . He observed u. a. the sun , which was dangerous since he had no tools to weaken the bright light. He only moved the observation time to the morning and evening hours when the sunlight was less glaring. On February 27, 1611, he first noticed dark spots on the sun. Since he was unsure at first whether it was an atmospheric phenomenon or an optical illusion, he repeated his observations, calling in his father. Since their eyes were affected, they later used a safer observation method: Using a pinhole, they directed the sunlight into a darkened room and looked at the sun disk on a piece of white paper (the principle of the camera obscura ). The existence of the spots could be proven beyond doubt. Their daily movement on the solar disk was correctly traced back to the sun's own rotation. In June of the same year Johann Fabricius published a 22-page text De Maculis in sole observatis et apparente earum cum Sole conversione narratio in Wittenberg , in which he describes all the details of the discovery and gives his father a due share. 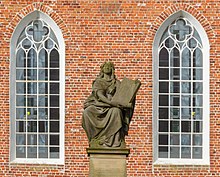 Monument to David and Johann Fabricius in the Osteel cemetery

The discovery was in contrast to the classical view of Aristotle , according to which the sun was perfect, and the doctrine of the Church, according to which the sun should be, as it were, "immaculate", like the Virgin Mary. Although the Italian Galileo, the English Thomas Harriot and the German Christoph Scheiner had already noticed spots on the sun in 1610, Fabricius was the first to describe the discovery in a scientific treatise. However, Galileo and Scheiner passed over his work in silence in the following period. Fabricius is given as the discoverer of sunspots by Simon Marius in the Mundus Jovialis (1614) and by Kepler in the Ephemerides Novae (1618). Fabricius' writing was long forgotten.

Johannes Kepler regretted the early death of what he said was a “gifted and eager young man who lives on through his writing about the sunspots”.