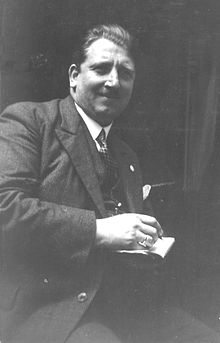 Joseph Roth (* the 30th January 1896 in Cologne , † 22. January 1945 in Friesdorf ) was German elementary school teacher and politician of the Center Party . He was the first chairman of the center in Bad Godesberg and a member of the district council of the Bonn-Land district .

Roth was the first of seven children to the church and decoration painter Wilhelm Roth (1870–1948) and his wife Margarethe, née Kruth (1866–1932), born. He grew up in the Belgian Quarter in Cologne in a strictly Catholic environment. Three of his younger brothers, Willi (1898–1952), Ernst (1902–1945) and Karl Gustav (1902–1987), became priests . His role model was the educator Lorenz Kellner . After attending primary school, he completed training as a primary school teacher at the teachers' seminar and the upstream preparation facility in Euskirchen .

In 1914, at the beginning of World War I , Roth joined the 5th Westphalian Infantry Regiment No. 53 stationed in Cologne as a war volunteer and was seriously wounded in France at Neuve-Chapelle in the trench warfare after the first Battle of the Marne at the end of December 1914 . He received the Iron Cross 1st Class and the Wound Badge in black. After his discharge from military service in 1917 as a deputy sergeant - this career was open to him with a one-year volunteer privilege - he finished his training as a primary school teacher in Euskirchen in January 1918. He had his two teacher exams on February 5, 1918 and October 28, 1919.

As a junior teacher, he worked at various elementary schools .

The old votive cross in its current location

In many articles in the Godesberger Volkszeitung and in speeches at public political events, Roth repeatedly attacked the National Socialists . With the seizure of power by the National Socialists, Roth and the Godesberg mayor Zander were given a forced leave of absence on March 13, 1933 at Heinrich Alef's request and were taken into “ protective custody ” for one day . In the school chronicle of the Burgschule, where he worked as a teacher at the time, it says:

On Monday, March 13th, the national revolution was carried out in Godesberg. An SA team ( Sturmabteilung ) occupied the town hall and forced the mayor, the two salaried councilors and three other officials to take immediate leave of absence. Such a department of 20–30 men also appeared at the Burgschule and arranged for the teacher Roth to be given leave immediately because, in his capacity as chairman of the Godesberg Center Party, he had fought the National Socialists sharply.

On June 3, 1933, again under massive pressure from Alef, now the National Socialist Mayor of Bad Godesberg, he had to resign from his mandate as a member of the district council and as chairman of the Center Party in Bad Godesberg. A few weeks later, on April 6, Alef wrote in his office as State Commissioner about the attempt to transfer Roth as a teacher:

Teacher Roth was and is probably still the leader of the local Center Party today. In this capacity he made himself impossible in Bad Godesberg by disseminating untrue claims, especially about the NSDAP. Incidentally, he is referred to as the author of the inflammatory articles that have repeatedly appeared in the local organ of the center (Godesberger Volkszeitung), which particularly impeded and inhibited the development of the national uprising here in central Bad Godesberg. Roth also appeared more often as a public speaker and did not shy away from insulting and hurtful expressions towards his political opponents.

Nevertheless, he was still active as a teacher at the Bad Godesberg Castle School. It was not until 1935 that Alef managed to get Roth transferred to the Friesdorf elementary school. This led to the Roth teaching Reid did not join in on Hitler because he was still at his new place of Friesdorfer elementary school, was at the time of the oath either in the castle school and did not have to serve arrears him. In the same year his brother, Vicar Ernst Moritz Roth , had great difficulties with the National Socialists. At the beginning of the war in 1939, Roth was drafted into the Wehrmacht, but dismissed in 1940 due to an acute shortage of teachers and reasons of age. After Roth returned home from the front, he met Hans Karl Rosenberg in secret :

“Some time after his sudden disappearance, I think it was a few months, Mr. Roth was suddenly back, but did not show up at school. However, he came to our house to visit, and my father locked himself in his library with him. Hours later they split up and I never saw him again. "

Rosenberg died on April 17, 1942 of the consequences of a medical "failure to assist".

As a staunch Catholic, Roth built large altars in front of his house for every Corpus Christi procession and prayed regularly with the school children. This is one of the reasons why the old family cross, one of four old votive crosses from Friesdorf, was knocked over and damaged several times. Roth, however, had the cross erected again and again and repaired. From 1940 to 1944 Roth worked again as a teacher in Friesdorf. On August 22, 1944, after the assassination attempt on Hitler as part of the Gewitter campaign, he was arrested a day later in the Cologne Gestapo prison EL-DE-Haus and from there with other former Reichstag deputies and politicians of democratic parties (including Konrad Adenauer , Thomas Eßer , Josef Baumhoff , Peter Schlack , Otto Gerig , Peter Paffenholz , Peter Knab and Hubert Peffeköver) to the labor education camp in the exhibition halls in Cologne-Deutz, the Cologne exhibition center . Roth, Gerig, Schlack, Baumhoff, Knab and Peffeköver were deported from the exhibition center with other former politicians and also with the priest Alexander Heinrich Alef on September 16, 1944 to the Buchenwald concentration camp , prisoner number 81555. Together with Baumhoff, Gerig, Knab, Peffeköver and Slag was placed in cell block 45.

The laid stumbling block on the house

When he was released on October 28, 1944, a concentration camp doctor injected Roth with a poison injection, a so-called petrol syringe ( phenol syringe ), and he returned home totally emaciated (from 120 kg when he was arrested to 48 kg when released). Shortly before the end of the year, according to the instructions of the Gestapo, Roth was to be forcibly deported to Leipzig , Saxony , so he first hid with his cousin Josef Höffer. Ultimately, his brother Ernst hid him with his friends, the Wachter family in Dattenfeld . At the request of his wife at the Gestapo, he was finally able to return home for Christmas.

On January 22, 1945, he died at home as a result of the poison. The authorities forbade the family from having a regular funeral, and the local pastor too had too many concerns about attending. Close friends and schoolchildren pulled the coffin to the cemetery on two sleds. After Polish prisoners of war had dug the grave, Roth was buried in the closest family circle by his wife, children and his siblings Ernst (in the capacity of priests), Karl and Elisabeth. However, the Gestapo asked for an addition to the text on the death slip:

His death came suddenly as a result of his health, which had been badly shaken during the last air raids.

Katharina Roth had to fight to be considered a politically persecuted victim and was eventually given the Politically Persecuted ID No. 123 . In 1950, Peter Hensen suggested to the city administration that an honor should be given to his party friend and Nazi victim. As a result, the mayor of Bad Godesberg, Heinrich Hopmann , renamed the Friesdorfer Dorfplatz to Joseph-Roth-Platz in the same year . After violent public protests, however, the name of the square was revoked in 1956 and a side street at Roth's house was renamed Joseph-Roth-Straße . There too, residents resisted the name until the mid-1960s and threatened to boycott the election. But this time the protest was unsuccessful and the street name remained.

Bernd Wittschier wrote in 1989 for the first time about the "Martyr Roth" in Theological , a supplement to the Offerten Zeitung for the Catholic clergy . In 1996, Prelate Helmut Moll called for contemporary witnesses for Roth in the press office of the Archdiocese of Cologne (No. 800). This call was made in connection with the work on the German Martyrology, to which Prelate Moll had been commissioned. In 2000 Joseph Roth was accepted into the German Martyrology of the 20th Century . 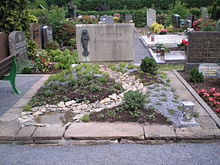 The grave in the Friesdorf cemetery

In the traveling exhibition "Martyrs of the Archdiocese of Cologne from the National Socialist Period", which has been showing the educational work of the Archdiocese of Cologne at various locations since 2000, a replica of his concentration camp number and the red triangle for political prisoners, as well as a brief outline of his life, can be seen .

In 2003, a memorial site for the contemporary Cologne martyrs was created in the Basilica of St. Ursula , and Roth's name has also found a place there in the newly created memorial chapel within the church. At the end of 2005, the city of Bonn honored Roth by making his grave an honorary grave . In May 2006 the artist Gunter Demnig laid a stumbling block for Roth in front of the former house where he lived and died in Friesdorf . On January 30, 2020, a second Stolperstein was laid by the artist Demnig for Roth in Bad Godesberg.