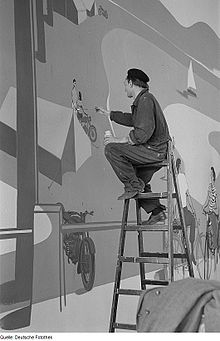 Decorative painter at his work

Decorative painting and decorative painter was and is an independent subject area of ​​the painter's profession and is considered to be handicrafts .

“Decorative painting is part of the arts and crafts. It is a handicraft which, in its simplest achievements, becomes ordinary craft, but in its highest it is fully part of the actual art. The smoothly painted wall on the one hand and the ceiling painting, the theater curtain rich in figures on the other hand may be seen as the opposites between which the profession of decorative painter unfolds.

Painting creates its pictures because of the pictures; it is an end in itself. Decorative painting adorns the works of architecture and decorates the products of the trades; it is the art of furnishing, hence the term “ staff painting ” , which is used synonymously . "

Since the early 1990s there has been an annual international meeting of the world's best decorative painters called SALON . The first meeting took place in France in 1996 . Other places were z. B. Paris , New York City , London , Oslo , Chicago , Aarhus , Versailles , Bruges and Atlanta . For a long time, Karl Groissenberger was the only German-speaking participant at this meeting. The last meeting took place in Hamburg in March 2012 and was a project by the Freifrau von Schulz eV association . B. had to emigrate to France or Belgium , where the craft is still cultivated today. Meanwhile, however, a training opportunity is also offered in southern Germany.