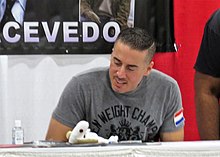 Both Acevedos parents lived in the New York district of Brooklyn . He and his brother Richard were both born there as well. The Acevedos later moved to the Bronx . Kirk discovered his interest in acting as a child. He graduated from LaGuardian High School of Performing Arts. From 1997 to 2003 he played the role of Miguel Alvarez in the television series Oz - Hell Behind Bars .

In 2005 he married the actress Kiersten Warren , with whom he has a daughter born in 2004. He is the stepfather of Warren's daughter Misti Traya , who was also an actress.