The following important information is missing from this article:
criticism
Help Wikipedia by researching and pasting it .

Person of Interest (English for person of special (police) interest ) is an American crime thriller - science fiction - television series by the British screenwriter Jonathan Nolan . It first aired on CBS on September 22, 2011 . The series consists of five seasons and 103 episodes.

The German-language premiere was on 14 August 2012 at the German pay-TV transmitter RTL Crime to see.

The free TV broadcast started on September 13, 2012 on RTL . The series was broadcast on Austrian terrestrial television from March 30, 2013 on ATV . In Switzerland, the first six episodes of the first season were broadcast from September 28 to October 12, 2012 on 3+ .

Logo of the software company IFT founded by Nathan and Harold

In the wake of the terrorist attacks of September 11, 2001 , the billionaire and programmer Harold Finch and his friend Nathan C. Ingram designed a top secret surveillance system with an artificial intelligence for the US government, which with the help of the most modern technology, its citizens around the clock spied on. Cell phones and the Internet are part of it, as are surveillance cameras with face recognition. All communication and every movement is recorded in real time and analyzed by the system. By evaluating the collected data, future events that are planned can be prevented. The justification for this espionage is the prevention of terrorist attacks . Due to the large number of violent crimes detected, the surveillance system categorizes them into “relevant” and “irrelevant” crimes, with “relevant” crimes only being those that result in a large number of fatalities. Murders and crimes against ordinary citizens are classified as "irrelevant" by the surveillance system. While the "relevant" list is regularly passed on to law enforcement agencies for further investigations into a group called "Northern Lights", the list of "irrelevant" crimes is cleared unnoticed every day at midnight.

Ingram is troubled by the fact that this does not prevent a large number of murders and crimes, even though the surveillance system could. Finch, however, is strongly against interfering and risking the discovery, but he is aware of the power the surveillance system is and how devastating it would be in the wrong hands. That is why the monitoring system is completely autonomous and only provides social security numbers. Ingram, however, secretly builds a backdoor into the system, which gives him the "irrelevant" numbers. When Ingram is murdered, many other people die and Finch is injured, Finch goes into hiding and continues Ingram's work. Through this back door he receives, at irregular intervals, social security numbers of people who will be involved in a violent crime. Whether as a perpetrator or a victim is initially unclear. To prevent these crimes, he gets help from former Special Activities Division operator John Reese in hiding . Reese follows on the heels of this "person of interest" to find out more about the possible perpetrator or the possible victim and to prevent the crime.

Reese uses police help from the corrupt New York detective Lionel Fusco in his investigation. By blackmailing one of Fusco's superiors, he had him transferred to the department of Detective Jocelyn Carter, who is already on the trail of Reese and Finch in their illegal fight against crime. While Reese is plagued by his past, in which he couldn't choose to love his girlfriend Jessica, they are able to convince Detective Carter to work with them during the course of the first season. However, for the time being, Fusco and Carter do not know that they both work with Finch and Reese.

During their work they get on the track of the Mafioso Carl G. Elias, who wants to unite the five New York Mafia families and to usurp the rule of the New York underground, but is arrested towards the end of the first season. They also get to know Zoe Morgan, a “fixer” in crisis management, who she often supports due to her enormous influence on the upper class. The main opponent at this early stage is a corrupt police organization called HR, in which Fusco works undercover for John. Furthermore, the team around the machine is attacked by the psychopathic hacker Root alias Samantha Groves, who kidnaps Finch in the finale of the first season.

In the course of the second season, a powerful company called "Decima Technologies" under the operational management of John Greer begins to force the machine to shutdown using a virus in order to then take over it itself, which fails, but from now on root to the analogue interface of the machine and the machine is finally "freed". The search for Reese also comes to a head with Special Agent Nicholas Donnelly, an FBI agent who even manages to arrest Reese along with other suspects, but has to let him go again. Later HR detective Cal Beecher kills Carter's friend, who from now on wants to bring HR down at all costs. Former government agent Sameen Shaw also joins the team because it saved her from her old employer.

In season three, Carter can bring down HR with John's help, which she pays with her life. Reese then briefly leaves the team, but returns again. There is also danger from a militant group called “Vigilance”, which claims to be committed to the privacy of its citizens - however, as one learns in the finale of the third season, Vigilance was founded by Decima to convince the government of the need for a new one to let artificial intelligence called "Samaritan" go online because they can no longer get any information from the machine. At the end of the third season, the team has to work rather reluctantly with Root, as this is now a great help in the fight against Decima and his system Samaritan through its direct connection to the machine.

In the fourth season the team has to start the day with new cover identities, as Samaritan is now fully functional and they are hunted by Greer and his helpers with his help. 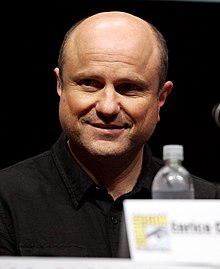 After the basic situation has been established in the pilot episode, the television series tells in vertical, self-contained episodes. At the beginning of the first season, few horizontal elements, like Finch's backstory, Reese's former relationship, Carter's investigation into Reese and the search for Elias, run through the individual crime plots. After that, horizontal elements make a more significant contribution, especially incidents relating to Reese's former work as an agent and the course of the construction of the machine, form a main element of the plot in the second season. From the end of the second season, a powerful Chinese company called "Decima Technologies" becomes a major opponent. In season 4, Brotherhood - a rising street gang in New York City - becomes Elias' adversary before both organizations are crushed in the course of the Samaritan cleansing.

Jim Caviezel , Michael Emerson and Kevin Chapman at the Person of Interest panel at San Diego Comic Con in 2014.

The German synchronization was for a dialogue book by Jürgen Wilhelm under the dialogue director of Joachim Tennstedt by the synchronous company Hermes Synchron GmbH in Potsdam .

The table lists the actors, their role names, their affiliation to the main cast (●) or to the secondary and guest actors (•) per season (1–5), the total of the episodes with appearances in the main and secondary or guest roles as well as their German voice actors.