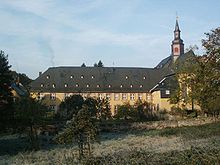 Schönau monastery in the Taunus 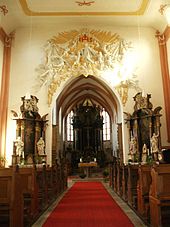 Rectory, Schönau monastery in the Taunus

The monastery Schoenau is a monastery in the diocese of Limburg in the outskirts of Strüth in Rhein-Lahn-Kreis .

In 1117, the actual progenitor of the Nassau family , Count Dudo von Laurenburg , donated his estate in Lipporn to the Allerheiligen monastery in Schaffhausen , Switzerland, in order to establish a provost office . From this, the Benedictine Abbey of Schönau emerged in 1126 , which was founded by Count Ruprecht I von Laurenburg , the Vogt of Lipporn and a son of Dudo and Anastasia von Arnstein.

In the years 1126 to 1145 the Romanesque foundation was built, presumably with a three-aisled basilica .

In 1340 the Schönau monastery was so economically strong that it was able to promise the city of Frankfurt am Main support from armed men and wagons.

The Gothic choir, which is still preserved today, and an Elizabeth chapel were built on the north side of the nave between 1420 and 1430. The Elisabethenkapelle was not rebuilt after the big fire in 1723.

Johannes von Schwelm († 1510) became abbot of the monastery in 1493, he had the bones of Elisabeth von Schönau transferred from their old burial place next to the altar of the holy virgins in the choir of the monastery church into a side chapel; In 1631, when the Swedes plundered, Elisabeth's grave was also destroyed.

During the Reformation , the surrounding communities of Strüth , Welterod and Lipporn became Protestant between 1541 and 1544 - but Schönau Monastery remained Catholic .

In 1606 the nunnery was closed after only a few sisters lived there in Schönau in a fairly relaxed order.

During the Thirty Years' War , Swedish and Hessian soldiers raided Schönau Monastery between 1631 and 1635 . The Swedes drove out the monks, plundered the monastery, broke up the grave of St. Elizabeth and scattered her bones. Only the top of the skull was saved. Today it is kept in a reliquary on the right side altar of the church.

A major fire destroyed the church and monastery in 1723; only the Gothic choir remained visible. The reconstruction of the following years in the form of the Baroque gave the monastery its shape that has been preserved to this day.

In the course of secularization , the men's convent was dissolved between 1802 and 1803 and the monastery passed into Nassau ownership. Some of the buildings were sold to private individuals. The parish previously associated with the Schönau monastery became part of the Limburg Vicariate General , from which the Limburg diocese emerged in 1827 .

In 1904 the Sisters of Dernbach moved into the monastery; from 1947 to 1975, Premonstratensians who had been expelled from the Teplá Monastery also lived there . The last Dernbach sisters left the monastery in 1986, and the facility has been used by the local Catholic parish of Sankt Florin ever since . The Schönau Book Corner was opened as a public parish library in 1994. The former farm building became three years later as the "One World House Schönau Monastery" as a learning and meeting place for groups. In 2001, a computer training facility and an internet café were also set up in the rooms of the One World House.