The school building of the Musikschule Mitte, formerly Köllnisches Gymnasium

The Köllnische High School was the first Berlin grammar school . The school building was erected in 1868 in the Berlin suburb of Neu-Kölln at the corner of Inselstrasse and Wallstrasse, based on plans by city building officer Adolf Gerstenberg . Today the Fanny Hensel music school is located in the listed building complex.

As early as the 14th century there was a Kölln Latin school on the western bank of the Spree. In 1540 Heinrich Knaust , a student of Martin Luther and Philipp Melanchthon , took over the management of this school.

After the Seven Years' War , the upper level of the Berlin Gymnasium was merged with the Köllnisches Gymnasium to form the Gray Monastery . The educational institution was now called the Berlinisch-Köllnisches Gymnasium zum Grauen Kloster . In 1824, however, the separation took place again. The students of the Kölln school used the premises of the town hall of Kölln . However, due to the increasing number of pupils in the 1860s, the municipal administration commissioned a new school and made the property on Inselstrasse 2-5 available. Between 1865 and 1868 the schoolhouse of the new Köllnisches Gymnasium was built according to plans by Adolf Gerstenberg, who at the same time also built the school complex of the Sophiengymnasium in Weinmeisterstraße.

The modern language profile of the school was expanded to include a humanistic one , and special sports such as fencing were taught. Once traded as an elite institution, it was made accessible to the lower classes by the 1920s at the latest. The educational institution was given after the takeover of the Nazis the name Altköllnische school . The grammar school was moved to Czechoslovakia in 1943; Pupils who could not or did not want to come also visited schools in the Berlin fringes.

The Germanist and publicist Rüdiger Loeffelmeier dealt extensively with school life, including at the Köllnisches Gymnasium, as an exam paper.

The new building was officially opened in November 1868. These were Paul Schnöpf and Ernst Ferdinand August (headmaster 1827-1868) composed their own music. Berlin's then mayor Heinrich Philipp Hedemann also took part in the event. Gerstenberg had designed a three-storey clinker facing building, which was adorned with a central projectile and a variety of terracotta ornaments. On the side of the Köllnischer Park, a house designed in the same style and with the same materials was added for the teachers of the educational institution, but only two floors high.

The school was badly damaged in World War II . Two thirds of the school building and the gymnasium were destroyed. The high school was not continued. In the 1950s, the remaining parts of the building were repaired in a simplified manner and served as a special school. After the fall of the Wall , the district administration had extensive renovation work carried out and the Fanny Hensel music school then moved into the schoolhouse.

The building with the attached teacher's house is a listed building.

Various brick stamps visible in the facade still refer to the origin and manual production of the bricks used today.

Teachers and graduates of the school 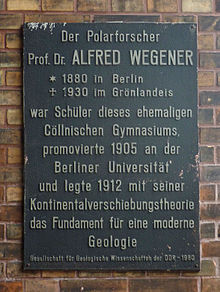 A website contains the names of a further 21 graduates from the Köllnisches Gymnasium in 1909 and 1910.

Principals of the school