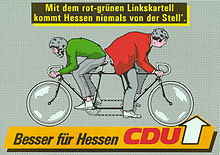 The elections to the 11th Hessian state parliament took place on September 25, 1983 (together with the citizenship elections in Bremen ).

The previous state election in 1982 had produced a result that neither the CDU nor the SPD allowed to take over the government on their own. The possible coalition partner FDP failed to make it into the state parliament, while the Greens represented in the state parliament were not considered capable of governing at the time. A grand coalition was rejected by the SPD. This stalemate was referred to in public as “ Hessian conditions ”.

The state election on September 26, 1982 had the following outcome:

*) To 100 missing percent = parties not represented in the state parliament

Since the FDP, which had already terminated the social-liberal coalition at the federal level, failed at the five percent hurdle , there was no majority capable of governing in the Hessian state parliament. The previous Prime Minister, Holger Börner , headed an executive state government until the state parliament was dissolved and new elections were brought forward in September 1983.

After the social-liberal coalition in the federal government broke up in the previous year, the Liberal Democrats split off from the FDP. The state elections in Hesse were the first election of this party. In the opinion polls, however, success was not predicted.

After the FDP had profited significantly from loan votes from the CDU in the early federal election in 1983 , it hoped to get back into the state parliament in the state elections with votes from tactically voting CDU supporters. The FDP advertised with the slogan "Because mer se need - In Hessen FDP".

The SPD clearly distanced itself from the Greens. "Photos with me and the Greens at a negotiating table won't even be seen as a montage," explained Holger Börner. He was a wet shaver and had to look at himself in the mirror in the morning. Börner ruled out a collaboration with the Greens: “For me, the Greens are outside of any calculation. I am not only ruling out a coalition, but any cooperation with them ”.

The central message of the SPD was "create clear conditions". The "Hessian conditions" were to be replaced by an absolute majority of the SPD, as the SPD had succeeded in doing in Hamburg at the end of 1982 in a comparable situation. Furthermore, the SPD took up its campaign topic from last year's election and posted "Power Hessen strong - against the Bonn Wende".

The SPD ran with Prime Minister Holger Börner as the top candidate. The opposing candidate of the CDU was parliamentary group leader Walter Wallmann . The FDP's top candidate was Ekkehard Gries . The Greens went into the election campaign with a dual leadership. Dirk Treber and Gertrud Schilling headed the Green List.

The early state elections on September 25, 1983 resulted in the following picture:

The FDP managed to clearly overcome the five percent hurdle . However, the Union's hope of achieving a majority together with the FDP was not fulfilled. The Liberal Democrats failed more than clearly with 0.4% of the vote and should no longer play a role in state and federal politics in the future.

The election review court at the Hessian state parliament ruled against the objections to the election in a judgment of March 15, 1984 and declared the election valid.

The stalemate was not resolved by the new election. Against this background, Holger Börner and the SPD decided, contrary to all statements before the election, to allow themselves to be tolerated by the Greens, i.e. to form a minority government themselves . Börner initially headed an executive state government.

In June 1984 he was elected Prime Minister with the votes of the Greens. In October 1985 the first red-green coalition finally came about in the Federal Republic. Both the tolerance phase and the coalition time were determined by the conflict between “ Fundis ” and “ Realos ” on the part of the Greens and various conflicts between the coalition partners SPD and Greens. The opposition and large parts of the press spoke of “red-green chaos”.

In February 1987 the coalition broke up over the dispute over the approval for the Hanau nuclear company Alkem (part of Nukem ). In April 1987 new elections were held.

Elections to the Hessian state parliament