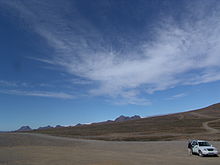 Langjökull from the Kaldidalur slope , in the foreground another glacier volcano , the Þórisjökull

Langjökull from the south

Hagavatn lake with a glacier tongue of Langjökull

Fumaroles and sinter terraces in Hveravellir

The Langjökull [ 'lauŋkˌjœˑkʏtl˳ ] ( Icelandic for "long glacier") with about 953 square kilometers the second largest glacier of Iceland .

It is located in the western part of the Icelandic highlands . You can see it clearly from Haukadalur , where on cloudy days the horizon line can hardly be distinguished from its ice surface.

Significantly, one encounters various data on the height or volume of the glacier in the literature: old measurements were not as accurate as new ones, and glaciers are constantly changing, partly due to general climate change, partly also, for example in Iceland, due to changes in the volcanic activity under the glacier.

The glacier reached its greatest thickness in 1840.

The glacier roughly follows the orientation of the active volcanic zone in Iceland, to which it belongs with at least two active volcanic systems under its cap, and thus extends from southwest to northeast. It shows a narrow point between the lake Hvítárvatn an des Kjalvegurs

and the valley glacier Þrístapajökull , which extends down towards Eiríksjökull to the northwest.

The Skríðufell peak is located by the lake Hvítárvatn . Other peaks are Fjallkirkja ( 1177  m ) and Hyrning ( 1320  m ). A hut belonging to the Icelandic Glacier Association ( Jöklarannskóknarfélag ) has been located a little east of Fjallkirkja since 1979 . The mountains Þursaborg ( 1290  m ) and Péturshorn ( 1370  m ) rise approximately to the northwest of Lake Hvítárvatn .

Numerous side and valley glaciers emanate from Langjökull. The most famous of these is Geitlandsjökull ( 1395  m ), a table mountain covered by a glacier, which is connected to Langjökull and protrudes from it in the southwest.

Research has shown that the valley glaciers Suður- and Norðurjökull slowly advanced into Lake Hvítárvatn and reached their greatest extent around the end of the 19th century, after which they retreated relatively quickly during the 20th century.

Water balance and development of the glacier

In relation to its size, few rivers flow from Langjökull. On the other hand, it has been researched that large amounts of water feed the lake Þingvallavatn underground and via the Arnarvatnsheiði the Hvítá and other rivers of the Borgarfjörður . The water, before it reached it as drinking water, had been on the move for about 1000 years since it fell on the glacier as precipitation.

The hot water of the springs in Borgarfjörður v. a. in Reykholtsdalur , for example Deildartunguhver , partly comes from a detour and is heated on the spot by geothermal energy.

Due to the lack of detectable sediments, research suggests that around 2/3 of the water flowing from Langjökull into Lake Hvítárvatn is groundwater.

It is now assumed that if the climate changes continue to develop in the same direction as before, the Langjökull glacier will have completely disappeared in about 150 years (see also: Glacier retreat ).

The Langjökull ice sheet is located on the WRZ (Western Rift Zone) of Iceland and thus in the area of ​​active volcanism.

At least two volcanic systems are partially under this glacier, one in the northeast and another in the southwest. The southwest has its central volcano in Prestahnúkur , other scientists also speak of the Geitland volcanic system , the other belongs to Hveravellir . The calderas are clearly visible on aerial photographs.

The best known of these volcanic systems is that of Hveravellir, which is sometimes also called the Langjökull system , it is also known as the Baldjökull system . Under the glacier lies a plateau with a large shield volcano and a table mountain .

The volcanic system has dimensions of approx. 55 km in length and 5-18 km in width.

During the warm periods of the Ice Age, the volcanic system u. a. create some shield volcanoes in the east of today's glacier, which in turn u. a. 7,800 years ago created the Kjalhraun lava field , over which the Kjölur highland slope runs. The high temperature area of Hveravellir belongs to this volcanic system. Many researchers also suspect that the central volcano is here.

Craters in the west of the glacier on today's Arnarvatnsheiði north of Eiríksjökull gave rise to the 50 km long Hallmundarhraun lava field around 1,000 years ago , which extends far down into Hvítárdalur and in which the Hraunfossar waterfalls are located. It also contains the longest, so far discovered lava caves in the country, cf. Surtshellir .

In the south-west, on the other hand, lies the Prestahnúkur system, whose crevices also extend below Geitlandsjökull and Langjökull.

This volcanic system measures approx. 70 km in length and 5–17 km in width.

There is also a high temperature area at Prestahnúkur.

Volcanic activity in the Holocene

Overall, however, it is a relatively quiet region from a volcanic point of view with only about 32 eruptions in the last 10,000 years, i.e. H. after the Ice Age , which lasted longer in Iceland than in mainland Europe.

4–5 shield volcanoes and 5 eruptive fissures were active after the Ice Age, most recently the fissures and craters in Hallmundarhraun in the 9th century.

Basalts from the Tholeitic series are to be mentioned as eruptive products . Rhyolite was also exposed, especially in the central volcanoes .

In the winter of 2011, members of the rescue companies from the nearby town of Borgarnes discovered that the Langjökull glacier had many more crevasses than before and that it had therefore become quite dangerous to navigate it as before.

When asked about the reasons for this development, the Icelandic geophysicist Helgi Björnsson stated that on the one hand it was due to climate change. The glaciers in Iceland are currently losing about 1 m in thickness over the surface every year. If the climate changes continued like this or even intensified, Langjökull might not be there in 150 years. On the other hand, the eruption of Eyjafjallajökull in 2010 had an impact that should not be underestimated. The ash that was spread over Langjökull melted it so much that the mass of snow that had accumulated in 2-3 years disappeared. Glaciers are formed by the accumulation of snow.

runs between it and Hofsjökull .

Scientific contributions to the glacier 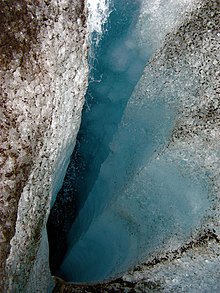