This article covers the small town and county in Portugal. For the municipality in Portugal see Monção (Freguesia) .

Monção is a small town ( Vila ) and a district ( concelho ) in the district of Viana do Castelo in northern Portugal . It is located on the Rio Minho , approx. 45 km east of the mouth of the river in the Atlantic at Caminha and approx. 35 km from Afreira , where the Minho turns from a purely Spanish river to the border river between Spain and Portugal.

Monção received town charter in 1261 . In 1368 the girl Deu-la-Deu Martins sat in a chest over the Minho to help her people in the fight against the Spaniards. Paozinhos (small bread cakes) are still baked in her honor today . In addition, a statue of the girl, mythologically designed as Danaide, adorns the north side of the Praça (market square). The cenotaph ( 1679 ) of this local heroine is in the Capela do Cruzeiro in the Igreja de Santa Maria dos Anjos .

Tradition also says: When the Spaniards almost starved the Portuguese Monção during a siege in 1368, the commander of Mongào had rolls baked with the last of the flour - and threw them to the occupiers over the walls of the city - the Spaniards considered them according to this trick Siege for sheer waste of time and withdrew.

The place is known for its wine ( Vinho Verde , which is mainly made from the Alvarinho grape variety .) And for the Festa da Coca on Ascension Day, when a 2 m high and 5 m long "dragon" against the helmeted and in a procession armed St. George fights, whereby of course the evil dragon is defeated.

Monção is the seat of a district of the same name. The neighboring districts are (starting clockwise in the east): Melgaço , Arcos de Valdevez , Paredes de Coura and Valença . In the north the district borders on Spain .

The following municipalities ( freguesias ) are in the Monção district: 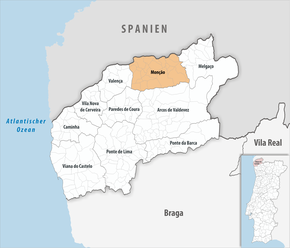 Monção was the end of a branch line of the Linha do Minho .

Municípios in the district of Viana do Castelo