The nasal helmet was a medieval helmet type that had developed from the conical buckle helmets and bow helmets . The helmet shape, which has only been preserved in a few original copies, appears particularly in the 11th / 12th centuries. Century on numerous image sources, but was used until the end of the 13th century. 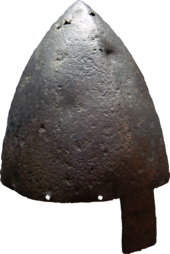 The nasal helmet from Olomouc. This 11th century Moravian helmet. is one of the five preserved original nasal helmets from the High Middle Ages. 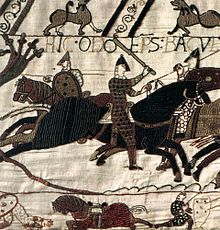 Warriors with nasal helmets on the Bayeux Tapestry , some helmet clasps are indicated

The nasal helmet was an iron helmet of the early Middle Ages, which had a nose piece ( nasal ), which sometimes becomes increasingly wider towards the lower end. The helmet bowl tapers to a point, which increases the protective effect. From the 10th century on , the nasal helmet, in contrast to the multi-part spangenhelm and two-part bow helmet, was increasingly forged from a single iron plate. A hood made of chain mesh was often worn under the nasal helmet as additional protection . The nasal helmet is also incorrectly known as the Norman helmet , although it was used all over Europe .

Most of the nasal helmets were found in the Germanic and Slavic populated areas of Central and Eastern Europe . The connection with the Normans could go back to the fame of the Bayeux Tapestry, which depicts numerous Norman knights wearing nasal helmets. The Anglo-Saxons depicted on the carpet also wear nasal helmets, which testifies to the prevalence of the helmet, which is often thought to be exclusively Norman. A nasal helmet with a particularly wide nose piece could hide the identity of its wearer (see e.g. Battle of Hastings ), which is also indicated on the Bayeux Tapestry.

In the 13th century the pot helmet became the preferred head protection of the fighting West and Central European nobility , but the nasal helmet was not completely replaced by other types of helmets until the end of the same century.

Similar to the younger pot and bucket helmets, many nasal helmets were originally heraldic painted or wore a crest ornament . A miniature in the Liber ad honorem Augusti sive de rebus Siculis by Petrus de Ebulo (1195/97, Bern , Burgerbibliothek ) indicates that crusaders identified themselves by means of a corresponding helmet painting.

Some of the few original helmets that have survived are interrupted at the bottom by perforations, which are sometimes interpreted as "rivet perforations" in the literature. In fact, these are probably holes for attaching helmet padding, or a braided armor was hung in the holes as neck protection. Such " necklaces " seem to have been used from the early 12th century. Accordingly, younger nasal helmets usually have a small hook on the end of the nasal iron. The neck collar could be pulled up and now also protected the lower half of the head, but made the wearer largely unrecognizable. This "full covering" of the head ultimately led to the development of the pot and bucket helmets of the High Middle Ages .

The helmet of Saint Wenceslas

The helmet of St. Wenceslas in the Prague Cathedral Treasure

Probably the best known preserved "nasal helmet" is the so-called Wenceslas helmet in the Prague Cathedral Treasury. However, the specimen consists of a younger iron dome (probably 10th century) and an older, early medieval, cross-shaped nose piece. The helmet would not have been usable in this form in combat. It is evidently a purely representative helmet, whose nasal, studded with silver sheet and richly decorated, is likely to have come from the Scandinavian region. It is possible that the helmet was also specially made as a relic for the veneration of St. Wenceslas of Bohemia , so actually never worn by the Přemyslid prince.

The exact chronology of the five original copies preserved is difficult. They are mostly roughly in the 11th / 12th Dated century. The somewhat older helmet shape does not yet have a hook on the nasal iron, so it should have been made by the end of the 11th century. The helmet of St. Wenceslas in Prague cannot be classified as a "real" nasal helmet in a scientific sense.

Nasal helmet with a round dome, second half of the 12th century